Wars of the Anunnaki: Nuclear Self-Destruction in Ancient Sumer (Paperback) 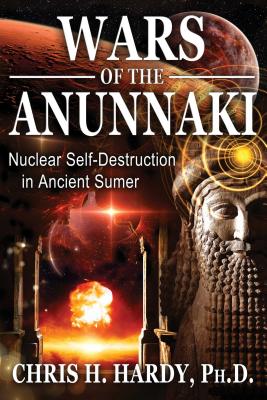 Examines the Anunnaki gods’ evolving relationships with humanity, their power struggles, and the details of their nuclear war on Earth

• Analyzes the crisis and rationale behind the Anunnaki decision to nuke 5 cities in the Jordan plain, resulting in the obliteration of Sumerian civilization

• Draws upon the work of Zecharia Sitchin, the Book of Genesis, Sumerian clay tablets, and archaeological evidence such as ancient radioactive skeletons

• Examines the Anunnakis’ lack of higher consciousness, their reliance on technology, their sacred power objects and sacred geometry, and the possibility of Anunnaki bases on Mars in the distant past

The detonation of nuclear weapons in the 20th century was not the first time humanity has seen such terrible destruction. Drawing upon the work of Zecharia Sitchin, the Book of Genesis, Sumerian clay tablets, and archaeological evidence such as ancient radioactive skeletons, Chris Hardy reveals the ancient nuclear event that destroyed the Sumerian civilization and the power struggles of the “gods” that led up to it.

The author explains how the Anunnaki came to Earth from the planet Nibiru seeking gold to repair their ozone layer. Using genetic engineering, they created modern humanity to do their mining work and installed themselves as our kings and our gods. Anunnaki god Enki had a fatherly relationship with the first two humans. Then Enlil, Enki’s brother, took over as Commander of Earth, instating a sole-god theocracy and a war against the clan of Enki and humanity for spoiling the Anunnaki bloodlines through interbreeding. This shift imposed a blackout not only of the very human nature of the Anunnaki “gods” but also of humanity’s own ancient past on Earth.

Two of Enlil’s attacks against the Enki clan and humanity are described in the stories of the Deluge and the Tower of Babel. His final attempt, after coercing the Assembly of the Gods into voting yes, was the nuclear bombing of 5 cities of the Jordan plain, including Sodom and Gomorrah, which resulted in the destruction of the Sumerian civilization and the Anunnakis’ own civilization on Earth, including their space port in the Sinai. The author reveals how, after each attempt, humanity was saved by Enki, chief scientist Ninmah, and Enki’s son Hermes.

The author explores how the Anunnakis’ reliance on technology and their recurrent wars caused them to lose touch with cosmic consciousness. And she reveals how we will be doomed to repeat this dynamic until humanity awakens to our true origins.

Chris H. Hardy, Ph.D., holds a doctorate in ethno-psychology. A cognitive scientist and former researcher at Princeton’s Psychophysical Research Laboratories, she has spent many years investigating nonlocal consciousness through systems theory, chaos theory, and her own Semantic Fields Theory. The author of many research papers and published books, including DNA of the Gods and The Sacred Network, she lives in France.

“Hardy makes a strong case for the use of nuclear weapons many thousands of years ago.”
— David Hatcher Childress, author of Technology of the Gods

“Chris Hardy, Ph.D., releases yet another scholarly probe--with expertly written evidence and keen observations of our ancient past that will not remain hidden or forgotten. Her extensive research and understanding piece together a history of rivalries, avant-garde knowledge of weapons, advanced technologies, and warring gods that can only be understood today, in our modern times, as we have entered the nuclear age. Great truths are revealed in this unraveling of history. Superb book!”
— Chase Kloetzke, author, ufologist, FATE Magazine Radio host

“Chris Hardy’s new book gives us an interesting account of the destructive wars of ancient times. She makes a strong case for the use of nuclear weapons many thousands of years ago--in a devastating war that ranged across several planets in our solar system.”
— David Hatcher Childress, author of Technology of the Gods and publisher of Adventures Unlimited Pres

“The Anunnaki wars described by Chris H. Hardy, Ph.D., are revealed to be territorial, egomaniacal family feuds where even nukes are used! So, if these warring Sumerian gods were extraterrestrials from a rogue Nibiru planet a million years ago--who needed gold to restore their planet’s deteriorating atmosphere and genetically boosted Homo erectus as well as other later standing-up primates to be a labor force--then this book also shows why humans have long fought irrational wars over whose ‘god’ is superior. Such an important work!”
— Linda Moulton Howe, Emmy Award-winning investigative journalist and reporter and editor of Earthfile

“The unraveling of some dark events in our past through the detailed accounts of the Sumerian tablets can make one’s hair rise when we discover the true and dire reasons for the smashing of the Babel Tower and especially the erasing of Sodom and Gomorrah by weapons of mass destruction. Chris Hardy shows that the tablets reveal a total absence of sexual sin and, to the contrary, a lethal infighting for power within a royal family of men and women who became our gods.”
— Marilyn Schlitz, Ph.D., author, laboratory and clinical scientist, social anthropologist, and presid

“From her thorough research in Sumerian texts as well as biblical literature and archaeological sites, Hardy has concluded that ‘weapons of mass destruction’ are not new. Readers might disagree, but they will not be bored with this richly documented and provocative book.”
— Stanley Krippner, Ph.D., author and professor of psychology at Saybrook University

“This groundbreaking book by Chris Hardy presents convincing evidence from ancient history and modern science that a cataclysmic nuclear event destroyed ancient Sumerian culture. This important and thought-provoking book challenges our assumptions about the past and raises disturbing questions about mankind’s future.”
— Richard Dewhurst, author of The Ancient Giants Who Ruled America

“This book should be of interest to all those who are, like me, interested in evidence for ancient warfare involving the use of weapons resembling modern nuclear weapons.”
— Michael A. Cremo, author of Forbidden Archeology