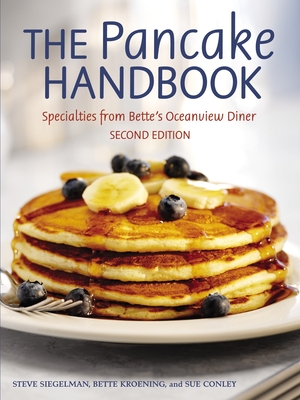 Settle into a plush, red Naugahyde booth at Bette's Oceanview Diner, and you'll be served some of the best pancakes on the planet. Back in 1982, Bette's was founded in Berkeley, California, by a breakfast-loving group of chefs. It has since become one of the Bay Area's favorite breakfast and brunch spots, with people lining up well before the doors open each morning.

In THE PANCAKE HANDBOOK, Bette's classic buttermilk pancakes take their place alongside daily pancake specials, including blueberry yogurt, golden cornmeal, double chocolate, and sourdough-not to mention the signature soufflé pancakes, which emerge from the oven spectacularly puffed and golden brown.

Packed with tips on keeping your pancakes fluffy and plenty of topping and syrup suggestions, this revised edition with more than 15 new recipes is sure to become your personal pancake bible.


STEVE SIEGELMAN, BETTE KROENING, and SUE CONLEY were among the original founders of Bette's Oceanview Diner in Berkeley, California. Steve is a Berkeley-based food writer for print and television. Bette, the diner's namesake, still owns and runs the restaurant with her husband, Manfred. Sue went on to found Tomales Bay Foods and has become a pioneer in the artisan cheese movement through her Cowgirl Creamery in Point Reyes Station and Artisan Cheese in San Francisco.

STEVE SIEGELMAN has written or contributed to 14 cookbooks, including Firehouse Food. His television writing credits include Mexico One Plate at a Time with Rick Bayless, Mario Eats Italy with Mario Batali, and Yan Can Cook with Martin Yan. Steve lives, works, and eats in Berkeley, California.