Forced to Fail: The Paradox of School Desegregation (Paperback) 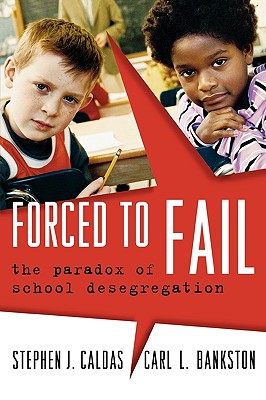 Forced to Fail traces the long legal history of first racial segregation, and then racial desegregation in America. The authors explain how rapidly changing demographics and family structure in the United States have greatly complicated the project of top-down government efforts to achieve an "ideal" racial balance in schools. It describes how social capital-a positive outcome of social interaction between and among parents, children, and teachers-creates strong bonds that lead to high academic achievement. The authors show how coercive desegregation weakens bonds and hurts not only students and schools, but also entire communities. Examples from all parts of the United States show how parents undermined desegregation plans by seeking better educational alternatives for their children rather than supporting the public schools to which their children were assigned. Most important, this book offers an alternative, more realistic viewpoint on class, race, and education in America.

Stephen J. Caldas is professor of educational foundations and leadership at Hofstra University (NY). He has authored or co-authored more than 45 publications, including (with Carl Bankston) A Troubled Dream: The Promise and Failure of School Desegregation in Louisiana, which was awarded the Louisiana Library Association Literary Award for 2002. Carl L. Bankston is professor of sociology at Tulane University, New Orleans. He has been author or coauthor of several previous books, including Growing Up American: How Vietnamese Children Adapt to Life in the United States (winner of the 1999 Thomas and Znaniecki Award and the Mid-South Sociological Association's 2000 Distinguished Book Award).