Redcoats' Revenge: An Alternate History of the War of 1812 (Hardcover) 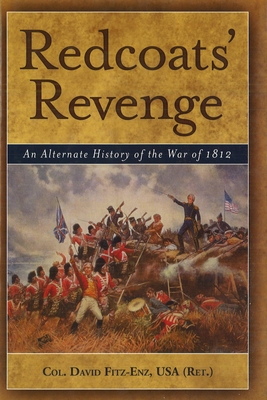 What if, on September 11, 1814, the United States had lost the close-run battle that Winston Churchill called the “most decisive” of the War of 1812? With a victory at Plattsburgh, would the British have eventually been able to regain control of their former colonies? Only one fleeting moment on Lake Champlain might have been needed to forever alter the young country’s history and return it to the grip of King George III. Redcoats’ Revenge brings the most successful field commander in history, the Duke of Wellington, to North America in 1814. A coalition of eight European countries has recently defeated Napoleon. With the emperor’s threat to England eradicated, Wellington releases the most powerful military juggernaut for service in the Western Hemisphere. His audacious plan sends him and his avenging veteran redcoats plunging straight south from Lake Champlain toward New York City. In Washington, the streets crackle with tension at the news of British ships on the Chesapeake. The White House is promptly evacuated and the capital left undefended when a diversionary force approaches the city and chokes off Baltimore. President James Madison must now decide which of his generals is capable of successfully facing off with the Iron Duke. No friend of the tyrannical Maj. Gen. Andrew Jackson, Madison finally agrees that he may be the only commander with any hope of matching Wellington. Redcoats’ Revenge is a vivid montage of the personalities and battles—real and quite possible—of the War of 1812. With its clever and compelling premise, this exciting alternate history will enthrall readers and reveal just how close the United States was to becoming a British colony once again.

Col. David Fitz-Enz, USA (Ret.), is the author of The Final Invasion: Plattsburgh 1814, which won the Distinguished Writing Prize from the Army Historical Foundation. He lives in Lake Placid, New York.

“Alternative history requires the deep knowledge of a subject if the author is to retain credibility in leading the reader along the border between fact and fiction. As he demonstrated in his best-selling non-fiction account of The Final Invasion, Col. David Fitz-Enz possesses just such expertise on the War of 1812. The result is a well-written, fast-paced novel that entertains and informs by plausibly describing how in the war’s latter years, far removed from the Napoleonic Wars’ denouement, the activities of the Duke of Wellington in North America could have decisively altered the history of both continents.”—Col. David Jablonsky, (ret.), distinguished fellow, US Army War College

“Colonel David Fitz-Enz has written a fascinating full-length story of ‘what might have been’ in the War of 1812. That he has made it into an entire book, rather than taking the more conventional option of writing only a chapter, is a feat in itself: but even more remarkable is that he manages to sustain the dramatic tension until the very last page—and the dénouement is as unexpected as it is thought-provoking. Along the way, the author quietly teaches us a great deal about many diverse and unfamiliar subjects, such as the technicalities of transporting horses by sea, or the methods for laundering money on a large scale in the conditions of 1814. Overall, it is a book that is well worth reading.”—Paddy Griffith, noted historian and former instructor, Royal Military Academy, Sandhurst

“A rousing good tale, which makes a ‘what if of history’ come alive.”—Joe Ryan, president, Living History Foundation, and fellow, Company of Military Historians

“Col. Fitz-Enz conjures an intriguing retelling of very plausible roads not taken in the War of 1812, by bringing Old Hickory and the Iron Duke to epic collision on the same battlefield to decide the fate of the young republic. It is a bold tale, well-told, and breathing fire.”—Peter Tsouras, author of Britannia’s Fist: From Civil War to World War—An Alternate History