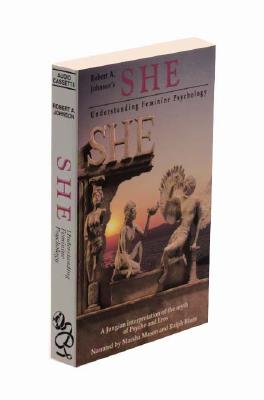 She - for men who want to understand women, and for women, to better understand themselves
In Jungian terms, the Grecian myth of Psyche and Eros serves as a powerful illumination of the feminine personality. This timeless tale of love, loss, loneliness and ultimate triumph is a revealing allegory of every woman's striving toward individuation -- to become the whole and complete person she was intended to be.

Understanding Psyche's story can bring deep insights into every woman's struggle to deal with various aspects of her feminity and successfully relate to the men in her life. The myth also helps to explain the difficulties a woman may have in reconciling her femininity with her animus -- the unsconscious masculine side of her personality -- and the problems a man may have in coming to terms with his anima, the inner feminine aspect of his psyche.
Newly updated and revised, She includes a special introduction by the author, and is narrated by renowned actress Marsha Mason and by Ralph Blum, bestselling author of The Book of Runes.

Ralph Blum has narrated a host of titles for Macmillan Audio, including "Hero with a Thousand Faces," "He," "She," "Zen Practice," and "The Book." In describing Ralph's reading of "Zen in the Art of Archery," also published by Macmillan Audio, "AudioFile" magazine declared, "Selecting reader Ralph Blum was a great way to resurrect the ideas in this rich and satisfying book. His academic tone inspires respect and makes the ideas even more intriguing." Marsha Mason is a respected supporting and occasional leading Hollywood actress. She has been nominated for four Academy Awards in her career and is also a veteran stage actress. She became a semi-regular on the popular NBC sitcom "Frasier," playing the love interest of Kelsey Grammar's father, John Mahoney. Most recently, she appeared in "Army Wives," "Lipstick Jungle," and "The Middle." Marsha has read several audiobooks including Sinclair Lewis's "Babbitt," Anton Chekhov's "The Cherry Orchard," and Robert A. Johnson's "She."