The Film That Changed My Life: 30 Directors on Their Epiphanies in the Dark (Paperback) 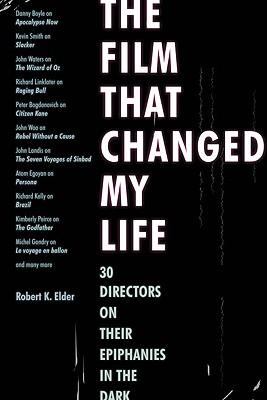 The movie that inspired filmmakers to direct is like the atomic bomb that went off before their eyes. The Film That Changed My Life captures that epiphany. It explores 30 directors’ love of a film they saw at a particularly formative moment, how it influenced their own works, and how it made them think differently.

Rebel Without a Cause inspired John Woo to comb his hair and talk like James Dean. For Richard Linklater, “something was simmering in me, but Raging Bull brought it to a boil.” Apocalypse Now inspired Danny Boyle to make larger-than-life films. A single line from The Wizard of Oz--“Who could ever have thought a good little girl like you could destroy all my beautiful wickedness?”--had a direct impact on John Waters. “That line inspired my life,” Waters says. “I sometimes say it to myself before I go to sleep, like a prayer.”

In this volume, directors as diverse as John Woo, Peter Bogdanovich, Michel Gondry, and Kevin Smith examine classic movies that inspired them to tell stories. Here are 30 inspired and inspiring discussions of classic films that shaped the careers of today’s directors and, in turn, cinema history.

"If you love films, and care about filmmakers, you’ll have a hard time putting this book down once you dive in."  —Leonard Maltin

"Elder has done us all a favor: Read this book, then go to your video store or to Netflix and see for yourself why these movies made the cut!"  —Lawrence Grobel, author, Al Pacino: in Conversation and The Art of the Interview

“A great and provocative read. The wonderful thing about being a critic or a lifelong movie lover is that life changes all the time in relation to the spells being cast on the screen. Elder’s book honors that alchemic relationship many times over. It’s addictive.” —Michael Phillips, film critic, Chicago Tribune