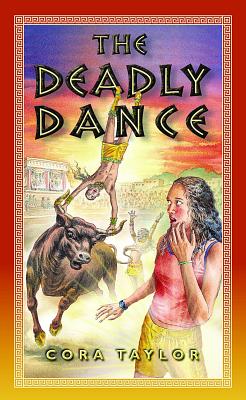 By Cora Taylor
Email orders@tridentbookscafe.com or call for price
Out of Print

Her parents hope that a Greek vacation is just what the doctor ordered for Penny. She's not getting along at all with her older brother, and she's so unhappy that she dreads going home - she mopes around and, more importantly, doesn't eat.

Penny's finally learning to relax and enjoy herself her a bit when her parents take her on a tour of the ancient Minoan Palace at Knossos - home of the fabled labyrinth of the Minotaur. But something strange happens - Penny inexplicably finds herself imitating a gymnastic vault as a huge bull charges toward her....

What follows is a first-rate adventure by Cora Taylor, one of Canada's most popular writers for young people. Set in the beauty of Greece and drawing on the mythology the country is so famous for, Taylor spins a story centred on "the deadly dance," the ancient tradition that sees young people defying death to dance with furious bulls - all for the amusement of others.

As Penny is thrown into this world, she finds herself not just learning how to stay alive, but learning things that will help her once she gets home - if she ever does.

Cora Taylor is one of Canada's best-known children's authors. She has published more than a dozen juvenile novels. Cora's Coteau titles include the very successful "Ghost Voyages" series and the "Spy Who Wasn't There" series, which includes Adventures in Istanbul and Murder in Mexico as well as her latest book, Chaos in China.