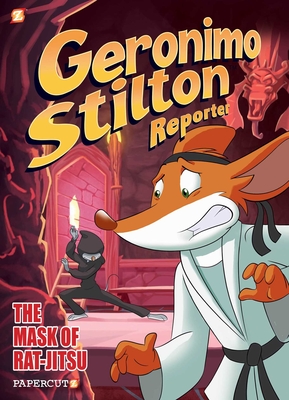 This is book number 9 in the Geronimo Stilton Reporter Graphic Novels series.

Geronimo Stilton is invited to a rat-jitsu martial arts championship in a snowy faraway land, much to the famouse reporter’s surprise. With his helpful relatives, Thea, Trap and Benjamin, Geronimo goes to cover the event for the Rodent’s Gazette. But something strange is happening. After each championship match, the winner disappears without a trace! Will Geronimo get involved and solve the mystery of the missing martial artists? Or will he be consumed with fear and race back to New Mouse City with his tail between his legs?

Born in New Mouse City, Mouse Island, GERONIMO STILTON is Rattus Emeritus of Mousomorphic Literature and of Neo-Ratonic Comparative Philosophy. He is the director of The Rodent's Gazette, New Mouse City's most widely read daily newspaper. Stilton was awarded the Ratitzer Prize for his scoops on The Curse of the Cheese Pyramid and The Search for Sunken Treasure. One of his bestsellers won the 2002 eBook Award for world's best-selling electronic book. In 2006 he won a Nickelodeon Kids Choice Award and in 2008 he won the Cartoomics prize "Beyond Comics." His works have been published all over the globe. In his spare time, Mr. Stilton collects antique cheese rinds.