How to Speak and Write Correctly (Paperback) 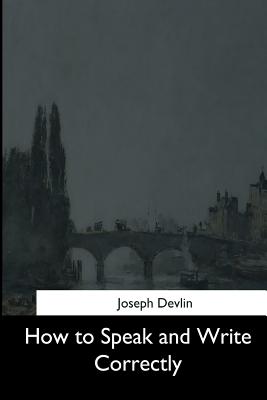 By Joseph Devlin
$9.94
Not currently in store. Available to ship from distributor's warehouse.
(This book cannot be returned.)

In the preparation of this little work the writer has kept one end in view, viz.: To make it serviceable for those for whom it is intended, that is, for those who have neither the time nor the opportunity, the learning nor the inclination, to peruse elaborate and abstruse treatises on Rhetoric, Grammar, and Composition. To them such works are as gold enclosed in chests of steel and locked beyond power of opening. This book has no pretension about it whatever, -it is neither a Manual of Rhetoric, expatiating on the dogmas of style, nor a Grammar full of arbitrary rules and exceptions. It is merely an effort to help ordinary, everyday people to express themselves in ordinary, everyday language, in a proper manner. Some broad rules are laid down, the observance of which will enable the reader to keep within the pale of propriety in oral and written language. Many idiomatic words and expressions, peculiar to the language, have been given, besides which a number of the common mistakes and pitfalls have been placed before the reader so that he may know and avoid them. The writer has to acknowledge his indebtedness to no one in particular, but to all in general who have ever written on the subject. The little book goes forth-a finger-post on the road of language pointing in the right direction. It is hoped that they who go according to its index will arrive at the goal of correct speaking and writing.