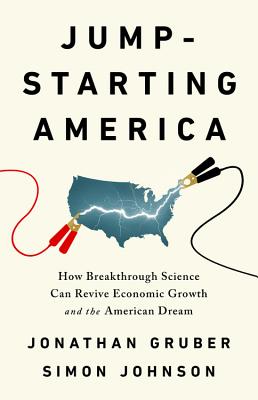 The untold story of how America once created the most successful economy the world has ever seen and how we can do it again.

The American economy glitters on the outside, but the reality is quite different. Job opportunities and economic growth are increasingly concentrated in a few crowded coastal enclaves. Corporations and investors are disproportionately developing technologies that benefit the wealthiest Americans in the most prosperous areas -- and destroying middle class jobs elsewhere. To turn this tide, we must look to a brilliant and all-but-forgotten American success story and embark on a plan that will create the industries of the future -- and the jobs that go with them.

Beginning in 1940, massive public investment generated breakthroughs in science and technology that first helped win WWII and then created the most successful economy the world has ever seen. Private enterprise then built on these breakthroughs to create new industries -- such as radar, jet engines, digital computers, mobile telecommunications, life-saving medicines, and the internet-- that became the catalyst for broader economic growth that generated millions of good jobs. We lifted almost all boats, not just the yachts.

Jonathan Gruber and Simon Johnson tell the story of this first American growth engine and provide the blueprint for a second. It's a visionary, pragmatic, sure-to-be controversial plan that will lead to job growth and a new American economy in places now left behind.

Jonathan Gruber is the Ford Professor of Economics at MIT. A key architect of both Romneycare and Obamacare, he appears regularly on both Fox News and MSNBC. Slate has named him one of the top twenty-five "Most Innovative and Practical Thinkers of Our Time." In addition to over 160 academic articles, he is the author of Health Care Reform (Hill & Wang), a graphic novel about the Affordable Care Act.

Simon Johnson is the Kurtz Professor of Entrepreneurship at MIT and a former chief economist to the IMF. His much-viewed opinion pieces have appeared in the New York Times, the Wall Street Journal, the Financial Times, the Atlantic, and elsewhere. With law professor James Kwak, Simon is the co-author of the bestsellers 13 Bankers and White House Burning and a founder of the widely-cited economics blog The Baseline Scenario.

"Something has gone profoundly wrong with the US economy over the last
two decades. Economic growth has been disappointing, and the little of it we
have witnessed has benefited the already rich and left everybody else behind.
This wonderfully readable book by two leading scholars explains why and what to
do about it. It is a powerful call for action for the government to get
involved, encourage innovation in local clusters, and help the economy get back
to creating good jobs for ordinary Americans. A must read."—Daron Acemoglu, coauthor of WhyNations Fail, and Elizabeth and James Killian Professor of Economics, MIT

"In this meticulously researched, highly readable, and exquisitely timed
book, Jonathan Gruber and Simon Johnson of MIT propose a new, national plan,
rooted in expanded scientific research, for accelerating US growth, reducing
inequality, and jump-starting regions of America which have been falling
behind. And, they show the funding mechanisms, federal and local
decision-making processes, and actual areas of new research which would
undergird it. It is brilliant at historical, economic, and political levels."—Roger Altman, former deputy secretary of the Treasury, founder andsenior chairman of Evercore

"This
brilliant book brings together economic history, urban economics, and the
design of incentives to build an ambitious proposal to jump-start growth across
geographies and mitigate inequality."—SusanAthey, Economics of Technology Professor and director, Initiative for SharedProsperity and Innovation, Stanford University

"Opportunities for technological breakthroughs have never been greater, but America is fumbling its historic leadership. Gruber and Johnson explain with clarity, authority and insight how America can regain its innovation mojo."—ErikBrynjolfsson, director of the MIT Initiative on the Digital Economy, and coauthorof The Second Machine Age

"What has been missing from our ongoing debate about inequality and bringing the fruits of prosperity to a much wider segment of people is an approach to make it happen in a way that is familiar to American society, tradition, and historical political success. Jon Gruber and Simon Johnson provide that missing link by demonstrating how smart public investment in science will build the capabilities and infrastructure that is the sine qua non for the investment that will generate returns in the form of new products, services, and other benefits that employ millions and are widespread geographically."—Ellen Dulberger, member of the Board on Science, Technology, andEconomic Policy, the National Academies of Science, Engineering, and Medicine

"This
is the book America needs now. The blueprint for a dazzling future, filled with
invention and growth, can be found in our recent past. Johnson and Gruber have
resurrected the lost history of American science, and the era of big government
that funded it. They have written a manifesto brimming with novel proscriptions
that are themselves evidence that this country hasn't lost its capacity to
innovate."—FranklinFoer, author of World Without Mind

"In Jump-Starting America, Jonathan Gruber and Simon Johnson present an innovative and compelling case to invest more in innovation, and they propose a bold plan to ensure that the benefits are shared throughout the US and the money is spent wisely. Nothing less than the preeminence of the US economy hangs in the balance."—Alan B. Krueger, former chairman of The Council of Economic Advisors,and Bendheim Professor of Economics and Public Affairs, Princeton University

"Jump-Starting America is a brilliant, fascinating, timely, and important book. It makes a compelling case that thoughtful government investment in science is the key to achieving a second golden age for the American economy. A joy to read."—SteveLevitt, coauthor of Freakonomics, andWilliam B. Ogden DistinguishedService Professor of Economics, University of Chicago

"America's future prosperity depends on investing in
our entire country, most especially those areas 'left behind.' Gruber and
Johnson show us the way through ingenious ideas based on how it was done in the
past and that cut through today's political gridlock, providing the inspiration
and optimism we need for enabling many more Americans to secure an economically
bright future."—EricSchmidt, former CEO and executive chairman of Google

"Long derided, at best for the hubris of officials trying vainly to do
science and pick winners and at worst for its cronyism, industrial policy is
making a comeback in many countries. Jonathan Gruber and Simon Johnson show how
the government can promote innovation while avoiding the classic pitfalls of
such policies. The United States of DARPA, NASA, the NIH or the NSF offers a
perhaps-unexpected role model. This very important book by two world leading
academics is a must-read not only for scholars, but also for all policymakers,
from those who still doubt the power of industrial policy to those who might be
tempted to apply it carelessly."—Jean Tirole, Toulouse School of Economics, 2014 Nobel laureate ineconomics

"Jonathan Gruber and Simon Johnson's important Jump-Starting America argues that public investment in knowledge and research can help put American economic growth back on track... Gruber and Johnson have produced a superbly argued case... Their analyses are always insightful ... One way or another, our economy could use a jump-start, and the authors' vision of a research- and education-led American comeback is compelling."—Wall Street Journal