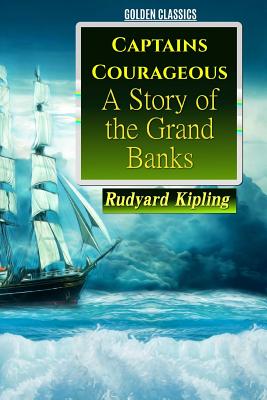 This is book number 13 in the Golden Classics series.

Classics for Your Collection: goo.gl/U80LCr --------- Protagonist Harvey Cheyne, Jr., is the son of a wealthy railroad magnate and his wife, in San Diego, California. Washed overboard from a transatlantic steamship and rescued by fishermen off the Grand Banks of Newfoundland, Harvey can neither persuade them to take him quickly to port, nor convince them of his wealth. Disko Troop, captain of the schooner We're Here, offers him temporary membership in the crew until they return to port, and Harvey later accepts. Through a series of trials and adventures, Harvey, with the help of the captain's son Dan Troop, becomes acclimated to the fishing lifestyle, and even skillful. Eventually, the schooner returns to port and Harvey wires his parents, who immediately hasten to Boston, Massachusetts, and thence to the fishing town of Gloucester to recover him. There, Harvey's mother rewards the seaman Manuel, who initially rescued her son; Harvey's father hires Dan to work on his prestigious tea clipper fleet; and Harvey goes to Stanford to prepare for taking over his father's shipping lines. Scroll Up and Grab Your Copy.