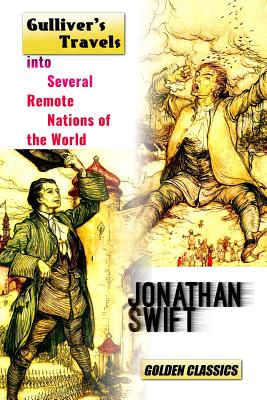 This is book number 11 in the Golden Classics series.

Classics for Your Collection: goo.gl/U80LCr --------- Gulliver's Travels, whose full title is Travels into Several Remote Nations of the World. In Four Parts. By Lemuel Gulliver, First a Surgeon, and then a Captain of Several Ships, (1726, amended 1735), is a prose satire by Irish writer and clergyman Jonathan Swift, that is both a satire on human nature and the "travelers' tales" literary subgenre. It is Swift's best known full-length work, and a classic of English literature. He himself claimed that he wrote Gulliver's Travels "to vex the world rather than divert it." The book became popular as soon as it was published. John Gay wrote in a 1726 letter to Swift that "It is universally read, from the cabinet council to the nursery." This ever-green book that has served and entertained many generations is divided into four parts, each describing Gulliver's adventures in a different undiscovered part of the world. Part I is Lilliput, which everyone knows about already; Part II is Brobdingnag, where everyone is much bigger than Gulliver (in contrast to Lilliput); Part III is a voyage to Laputa, Balnibarbi, Luggnagg, Glubbdubdrib, and Japan. And in Part IV Gulliver goes to the country of the Houyhnhnms, an island inhabited by super-intelligent horses. Scroll Up and Grab Your Copy.