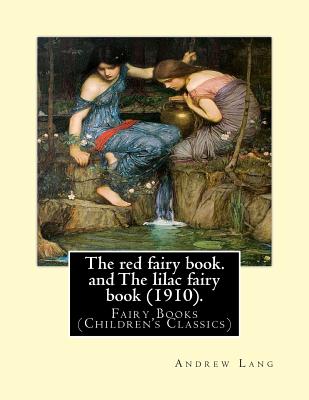 By H. J. Ford, Lancelot Speed, Andrew Lang
Not currently in store. May be available on Bookshop.org.
Find us on Bookshop.org to order!
(This book cannot be returned.)

Andrew Lang's Fairy Books are a series of twenty-five collections of true and fictional stories for children, published between 1889 and 1913. The best known books of the series are the twelve collections of fairy tales, known as Andrew Lang's "Coloured" Fairy Books or Andrew Lang's Fairy Books of Many Colors. In all, the volumes feature 798 stories, besides the 153 poems in The Blue Poetry Book. Andrew Lang (1844-1912) was a Scots poet, novelist, and literary critic. As acknowledged in the prefaces, although Lang himself made most of the selections, his wife and other translators did a large portion of the translating and retelling of the actual stories. Four of the later volumes (from 1908 to 1912) were published as by "Mrs. Lang". According to Anita Silvey, "The irony of Lang's life and work is that although he wrote for a profession-literary criticism; fiction; poems; books and articles on anthropology, mythology, history, and travel ... he is best recognized for the works he did not write." The twelve Coloured Fairy Books were illustrated by H. J. Ford (Henry Justice Ford), the first two volumes shared with G. P. Jacomb-Hood and Lancelot Speed respectively, the sequels alone. Several other volumes were illustrated by Ford. A. Wallis Mills also contributed some illustrations.... Henry Justice Ford (1860-1941) was a prolific and successful English artist and illustrator, active from 1886 through to the late 1920s. Sometimes known as H. J. Ford or Henry J. Ford, he came to public attention when he provided the numerous beautiful illustrations for Andrew Lang's Fairy Books, which captured the imagination of a generation of British children and were sold worldwide in the 1880s and 1890s........ Lancelot Speed (1860-1931) was a Victorian illustrator of books, usually of a fantastical or romantic nature. He is probably most well known for his illustrations for Andrew Lang's fairy story books. Speed is credited as the designer on the 1916 silent movie version of the novel She by H. Rider Haggard, which he had illustrated. Andrew Lang (31 March 1844 - 20 July 1912) was a Scottish poet, novelist, literary critic, and contributor to the field of anthropology. He is best known as a collector of folk and fairy tales. The Andrew Lang lectures at the University of St Andrews are named after him.Lang was born in Selkirk. He was the eldest of the eight children born to John Lang, the town clerk of Selkirk, and his wife Jane Plenderleath Sellar, who was the daughter of Patrick Sellar, factor to the first duke of Sutherland. On 17 April 1875, he married Leonora Blanche Alleyne, youngest daughter of C. T. Alleyne of Clifton and Barbados. She was (or should have been) variously credited as author, collaborator, or translator of Lang's Color/Rainbow Fairy Books which he edited. He was educated at Selkirk Grammar School, Loretto, and at the Edinburgh Academy, St Andrews University and at Balliol College, Oxford, where he took a first class in the final classical schools in 1868, becoming a fellow and subsequently honorary fellow of Merton College. He soon made a reputation as one of the most able and versatile writers of the day as a journalist, poet, critic, and historian. In 1906, he was elected FBA.He died of angina pectoris at the Tor-na-Coille Hotel in Banchory, Banchory, survived by his wife. He was buried in the cathedral precincts at St Andrews..............