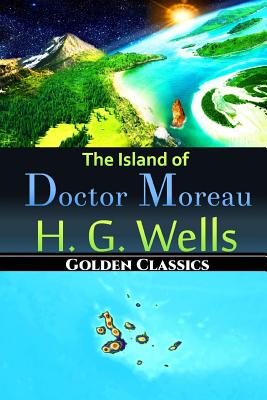 This is book number 1 in the Golden Classics series.

Classics for Your Collection: goo.gl/U80LCr --------- Edward Prendick finds himself shipwrecked on an island with Doctors Montgomery and Moreau. The former a follower of the latter, who just happens to be a mad vivisectionist. Beyond these scientists, Prendick finds himself intensely weirded out by the other inhabitants of the island, frightening man-animals created by Dr. Moreau. Moreau captures the island's animals and painfully turns them into half-men, then forces them to live by strict standards that he believes will overcome their bestial natures. Moreau's primary commandment is that they cannot eat meat. This is, of course, a recipe for suspense and horror, for how can one expect Leopard Men or Puma Men to curb their need for meat, when the humans conducting the experiments cannot curb their own bestial natures? Prendick finds himself becoming a participant, although not entirely willingly, in Moreau's society of vivisection. And once the animals finally rebel, as we know they must, he becomes the last man on the island, watching the tortured animals return to their natures and throw off Moreau's pseudo-society. Even now, more than a century after it was written, The Island of Dr. Moreau is spooky enough to work as an effective horror/sci-fi story, but its still relevant thematic depth is what makes Moreau essential to anyone who loves books. Genetics (eugenics), animal experimentation, psychology, colonization, imperialism, patriarchy, scientific chauvinism, religion, and ethical imposition are seriously and intelligently explored. Wells' implied conclusions may be unsettling at times, but The Island of Dr. Moreau will make you think. Scroll Up and Get Your Copy.

Herbert George Wells (21 September 1866 - 13 August 1946, known as H. G. Wells, was a prolific English writer in many genres, including the novel, history, politics, and social commentary, and textbooks and rules for war games. Wells is now best remembered for his science fiction novels, and is called the father of science fiction, along with Jules Verne and Hugo Gernsback.His most notable science fiction works include The Time Machine (1895), The Island of Doctor Moreau (1896), The Invisible Man (1897), and The War of the Worlds (1898). He was nominated for the Nobel Prize in Literature four times. As a creative writer his reputation mainly rested on the early science fiction books and on the comic novels. In his science fiction, he took the ideas and fears that haunted the mind of his age and gave them symbolic expression as brilliantly conceived fantasy made credible by the quiet realism of its setting. His best work has a vigour, vitality, and enthusiasm unsurpassed, in its way, by that of any other British writer of the entire 20th century.