The Royal We (Mass Market) 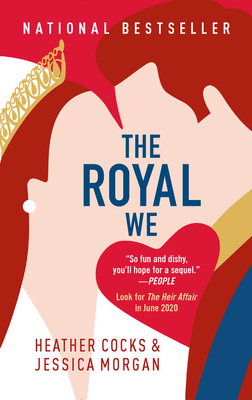 By Heather Cocks, Jessica Morgan
$8.99
On Our Shelves Now

This is book number 1 in the The Royal We series.

An American girl finds her prince in this "fun and dishy" (People) royal romance inspired by Prince William and Kate Middleton.

American Bex Porter was never one for fairy tales. Her twin sister Lacey was always the romantic, the one who daydreamed of being a princess. But it's adventure-seeking Bex who goes to Oxford and meets dreamy Nick across the hall - and Bex who finds herself accidentally in love with the heir to the British throne.

Nick is wonderful, but he comes with unimaginable baggage: a complicated family, hysterical tabloids tracking his every move, and a public that expected its future king to marry a Brit. On the eve of the most talked-about wedding of the century, Bex looks back on how much she's had to give up for true love... and exactly whose heart she may yet have to break.

Praise for The Royal We
"Hysterical" -- Entertainment Weekly
"Full of love and humor, and delicious in too many ways." -- Emma Straub, New York Times bestselling author
"Engrossing and deeply satisfying." -- Jen Doll, author of Save the Date

Heather Cocks and Jessica Morgan are the creators of the Internet's wittiest celebrity fashion blog, Go Fug Yourself, which draws millions of readers and made Entertainment Weekly's Must List and the Guardian's list of 50 Most Powerful Blogs. They are the authors of two young adult novels, Spoiled and Messy, and have written for publications ranging from New York magazine's web sites to VanityFair.com to Grazia UK. They both reside in Los Angeles.

"The characters should all be familiar: the heir to the British throne, his mischievous younger brother, his granny and the pretty commoner he meets in college. But in this version by bloggers Cocks and Morgan (a.k.a. the Fug Girls), the girl is American. Nick and Bex's love story is so fun and dishy, you'll hope for a sequel--with royal babies."
—People

"In the grand tradition of Curtis Sittenfeld's American Wife . . . A breezy, juicy novel that's like The Princess Diaries with fewer made-up countries and more sex-the kind of book you can imagine Pippa sneaking into Kensington Palace."—Entertainment Weekly

"Every bit as engrossing as the real Kate and Will. . . . The pages turn as easily as a tabloid feature on the royal couple-and you'll end up just as obsessed with Bex and Nick as you already are with Wills and Kate."
—Glamour

"Cute, well-written, and perfect for summer. . . . I loved it."
—Buzzfeed, "29 Books You Should Definitely Bring to the Beach This Summer"

"The authors hit all the right notes in this funny, smart, emotional tale that will definitely appeal to fans of Jojo Moyes."
—Library Journal (Starred Review)

"An entertaining read-but also a sharp critique of how we treat celebrities and what happens to people always in the paparazzi glare . . . Cocks and Morgan also know that daydreams should stay daydreams because the reality is much harsher. That's what elevates The Royal We from just a good beach book to a beach book with a message--while remaining entertaining enough to keep your butt in your beach chair."
—Philadelphia Inquirer

"The perfect summer read . . . a confection of a tale, but a satisfying one, a romantic romp carried by Cocks and Morgan's storytelling."
—Metro (Canada)

"Pages of biting humor and breathtaking glamour rewrite a fairy tale into something more satisfying than a stack of tabloids."
—Kirkus

"A joy from start to finish. THE ROYAL WE is that rare novel that makes you think, makes you cry, and is such fun to read that you'll want to clear your schedule until you've turned the final page. But be warned--Cocks and Morgan have created a world so rich, a romance so compelling, and characters so funny and alive, that you'll be terribly sad to see them go."
—J. Courtney Sullivan, New York Times bestselling author of The Engagements and Maine

"THE ROYAL WE is full of love and humor, and delicious in too many ways to mention in one little blurb. I read this novel as quickly as I could, relishing any few minutes I had to turn back to its pages. An absolute delight."
—Emma Straub, New York Times-bestselling author of The Vacationers

"A heartfelt exploration of a life lived in the spotlight, THE ROYAL WE balances dishy decadence with an honest look at the sacrifices required to stay princess to Prince Charming."
—Courtney Maum, author of I Am Having So Much Fun Here Without You

"THE ROYAL WE is as engrossing and deeply satisfying as any royal wedding documentary, and it's a thousand times more fun, from the fairy tale to the inevitable foibles. You will want Bex Porter to be your best friend. You will feel the same way about Cocks and Morgan, who are warm, witty, hilarious, and moving in their depiction of a very complicated relationship indeed."
—Jen Doll, author of Save the Date

"Readers should prepare to lose their hearts to THE ROYAL WE, a loving satire that is scandalously funny and wonderfully romantic."

"Underneath the frothy exterior is sharp look at the clash between modern women and the ways they are portrayed. It's not a fairy tale, but that doesn't mean it's not a great story."
—The Millions

"Cocks and Morgan tackled their first dip into mainstream fiction for adults and nailed it. THE ROYAL WE is a wonderful tale of young love, peppered with animated characters, difficult hardships, and selfdiscovery."
—RT Book Reviews