The Verge: Reformation, Renaissance, and Forty Years that Shook the World (Hardcover) 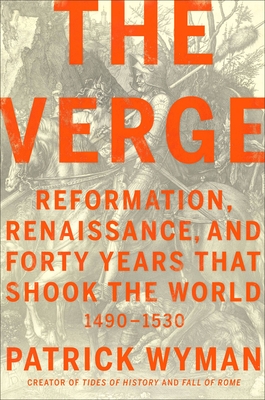 The creator of the hit podcast series Tides of History and Fall of Rome explores the four explosive decades between 1490 and 1530, bringing to life the dramatic and deeply human story of how the West was reborn.

In the bestselling tradition of The Swerve and A Distant Mirror, The Verge tells the story of a period that marked a decisive turning point for both European and world history. Here, author Patrick Wyman examines two complementary and contradictory sides of the same historical coin: the world-altering implications of the developments of printed mass media, extreme taxation, exploitative globalization, humanistic learning, gunpowder warfare, and mass religious conflict in the long term, and their intensely disruptive consequences in the short-term.

As told through the lives of ten real people—from famous figures like Christopher Columbus and wealthy banker Jakob Fugger to a ruthless small-time merchant and a one-armed mercenary captain—The Verge illustrates how their lives, and the times in which they lived, set the stage for an unprecedented globalized future.

Over an intense forty-year period, the seeds for the so-called "Great Divergence" between Western Europe and the rest of the globe would be planted. From Columbus's voyage across the Atlantic to Martin Luther's sparking the Protestant Reformation, the foundations of our own, recognizably modern world came into being.

For the past 500 years, historians, economists, and the policy-oriented have argued which of these individual developments best explains the West's rise from backwater periphery to global dominance. As The Verge presents it, however, the answer is far more nuanced.

Patrick Wyman holds a PhD in history from the University of Southern California. He previously worked as a sports journalist, covering mixed martial arts and boxing from 2013 to 2018. His work has been featured in Deadspin, The Washington Post, Bleacher Report, and others. He is currently host of the podcast, Tides of History, and previously the host of Fall of Rome.

"Whip-smart and crackling with life, THE VERGE shines brilliant new light on the era when the world as we know it was made. The turn of the Middle Ages into the early modern age was an exciting, confounding, sometimes terrifying time, revolutionary in almost every way. And Patrick Wyman is the perfect guide to its convulsions: he has a scholar’s brain but a raconteur’s touch for finding humanity in even the most complex story. This is popular history as it should be written, and a terrific debut from a very accomplished writer."—Dan Jones, New York Times bestselling author of THE PLANTAGENETS and THE TEMPLARS

"Extraordinary—THE VERGE deftly illustrates how a crucial forty-year takeoff period led Europe to world domination."—Roger Crowley, New York Times bestselling author of EMPIRES OF THE SEA and THE ACCURSED TOWER: THE FALL OF ACRE AND THE END OF THE CRUSADES

“In THE VERGE, Patrick Wyman expertly weaves the story of the birth of modernity. With a masterful gift for storytelling, Wyman connects fascinating individual lives to the massive social changes they unleashed, making THE VERGE as engrossing as it is informative. Wyman takes us from fleets in the Atlantic, to silver mines in Hungary, to wool traders in England, to the richest banks in Europe, clearly illustrating the sophisticated economic, technological, and political forces driving Europe towards global domination. THE VERGE is a must read for anyone who wants to understand the origins of the modern world.” —Mike Duncan, New York Times bestselling author of THE STORM BEFORE THE STORM

"If you want to understand why the world is the way it is today, you need to understand the events that took place in Western Europe during the 16th century. THE VERGE provides a glimpse into the world as it was 500 years ago, with a freshness and vivacity that can only come from someone with an intimate knowledge of how to write about both history and combat. Wyman uses the lives of key people—a queen, a colonizer, a banker, a knight—to introduce readers to the profound economic, political, technological, and social developments that provoked the development of the modern world. THE VERGE is an accessible and fascinating glimpse into the lives and thoughts of people who transformed the world."—Jennifer Raff, assistant professor of anthropology (University of Kansas) and author of ORIGIN: A GENETIC HISTORY OF THE AMERICAS

"THE VERGE is as engaging as it is erudite, a grand tour of the economic and cultural upheavals that shaped the modern world."—Zachary D. Carter, New York Times bestselling author of THE PRICE OF PEACE: MONEY, DEMOCRACY, AND THE LIFE OF JOHN MAYNARD KEYNES

"How did Europe go from a global backwater in the late Middle Ages to global dominance in the 19th century? In this dexterous account, Patrick Wyman literally follows the money, revealing how a resource-scarce corner of the world was forced in the late 15th century to develop innovative institutions and practices to pool, lend, and transfer capital, enabling everything from Columbus's voyages to the ability to wage total war across the continent and around the world."—Colin Woodard, New York Times bestselling author of AMERICAN NATIONS: A HISTORY OF THE ELEVEN RIVAL REGIONAL CULTURES OF NORTH AMERICA and UNION: THE STRUGGLE TO FORGE THE STORY OF UNITED STATES NATIONHOOD

"[A story] that well deserves retelling when it’s told well, as it is here.”—Library Journal

"That rare outing that quite successfully does the history justice and keeps you turning the pages...this is not a dry and detached academic history, preoccupied with actuarial tables and exegesis of manuscript translations: THE VERGE delivers a compelling narrative, a cultural and economic history shot through with colorful political and personal stories."—The National Review

"THE VERGE...is quite a bloody book. It is also the rarest of surprises: a read that you pick up to improve yourself on holiday, and then find that you are enjoying."—Financial Times