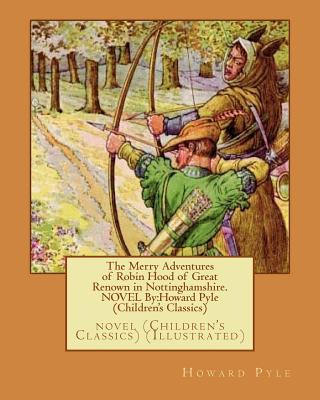 The Merry Adventures of Robin Hood of Great Renown in Nottinghamshire is an 1883 novel by the American illustrator and writer Howard Pyle. Consisting of a series of episodes in the story of the English outlaw Robin Hood and his band of Merry Men, the novel compiles traditional material into a coherent narrative in a colorful, invented "old English" idiom that preserves some flavor of the ballads, and adapts it for children. The novel is notable for taking the subject of Robin Hood, which had been increasingly popular through the 19th century, in a new direction that influenced later writers, artists, and filmmakers through the next century The plot follows Robin Hood as he becomes an outlaw after a conflict with foresters and through his many adventures and run-ins with the law. Each chapter tells a different tale of Robin as he recruits Merry Men, resists the authorities, and aids his fellow man. The popular stories of Little John defeating Robin in a fight with staffs, of Robin's besting at the hands of Friar Tuck, and of his collusion with Allan-a-Dale all appear. In the end, Robin and his men are pardoned by King Richard the Lionheart and his band are incorporated into the king's retinue, much to the dismay of the Sheriff of Nottingham.Pyle had been submitting illustrated poems and fairy tales to New York publications since 1876, and had met with success. The Merry Adventures of Robin Hood was the first novel he attempted. He took his material from old ballads and wove them into a cohesive story, altering them for coherence and the tastes of his child audience. Pyle's book continued the 19th-century trend of portraying Robin Hood as a heroic outlaw who robs the rich to feed the poor; this portrayal contrasts with the Robin Hood of the ballads, where the protagonist is an out-and-out crook, whose crimes are motivated by personal gain rather than politics or a desire to help others. The novel was first published by Scribner's in 1883, and met with immediate success.