The merry adventures of Robin Hood; of great renown in Nottinghamshire: is a novel by the American illustrator and writer Howard Pyle (March 5, 1853 - (Paperback) 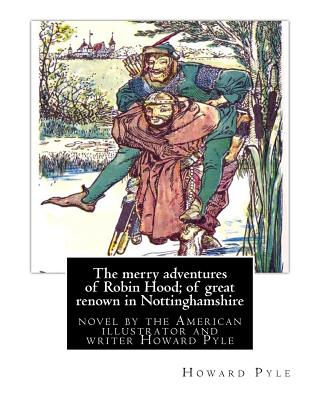 The Merry Adventures of Robin Hood of Great Renown in Nottinghamshire is an 1883 novel by the American illustrator and writer Howard Pyle. Consisting of a series of episodes in the story of the English outlaw Robin Hood and his band of Merry Men, the novel compiles traditional material into a coherent narrative in a colorful, invented "old English" idiom that preserves some flavor of the ballads, and adapts it for children. The novel is notable for taking the subject of Robin Hood, which had been increasingly popular through the 19th century, in a new direction that influenced later writers, artists, and filmmakers through the next century.Plot--The plot follows Robin Hood as he becomes an outlaw after a conflict with foresters and through his many adventures and run-ins with the law. Each chapter tells a different tale of Robin as he recruits Merry Men, resists the authorities, and aids his fellow man. The popular stories of Little John defeating Robin in a fight with staffs, of Robin's besting at the hands of Friar Tuck, and of his collusion with Allan-a-Dale all appear. In the end, Robin and his men are pardoned by King Richard the Lionheart and his band are incorporated into the king's retinue, much to the dismay of the Sheriff of Nottingham........ Howard Pyle (March 5, 1853 - November 9, 1911) was an American illustrator and author, primarily of books for young people. A native of Wilmington, Delaware, he spent the last year of his life in Florence, Italy. In 1894 he began teaching illustration at the Drexel Institute of Art, Science and Industry (now Drexel University). After 1900, he founded his own school of art and illustration, named the Howard Pyle School of Illustration Art. The scholar Henry C. Pitz later used the term Brandywine School for the illustration artists and Wyeth family artists of the Brandywine region, several of whom had studied with Pyle.Some of his more notable students were N. C. Wyeth, Frank Schoonover, Elenore Abbott, Ethel Franklin Betts, Anna Whelan Betts, Harvey Dunn, Clyde O. DeLand, Philip R. Goodwin, Thornton Oakley, Violet Oakley, Ellen Bernard Thompson Pyle, Olive Rush, Allen Tupper True, Elizabeth Shippen Green, Arthur E. Becher, William James Aylward, and Jessie Willcox Smith. Pyle's home and studio in Wilmington, where he taught his students, is still standing and is listed on the National Register of Historic Places.His 1883 classic publication The Merry Adventures of Robin Hood remains in print, and his other books, frequently with medieval European settings, include a four-volume set on King Arthur. He is also well known for his illustrations of pirates, and is credited with creating what has become the modern stereotype of pirate dress.He published his first novel, Otto of the Silver Hand, in 1888. He also illustrated historical and adventure stories for periodicals such as Harper's Magazine and St. Nicholas Magazine. His novel Men of Iron was adapted as the movie The Black Shield of Falworth (1954).......