The Wind Gourd of Laamaomao (Paperback) 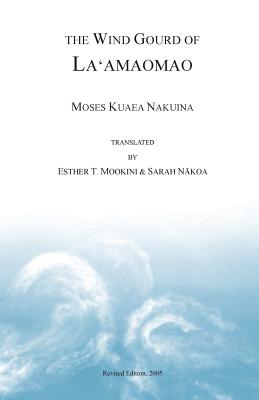 Excerpts from a review by Niklaus R. Schweizer, University of Hawai'i ("The Hawaiian Journal of History," 1991): Moses Kuaea Nakuina's "The Wind Gourd of La 'amaomao" belongs to the books and newspaper articles published by Hawaiian intelligentsia, who was astonishingly productive in the latter part of the 19th and beginning of the 20th centuries. Translators Esther Mookini and Sarah Nakoa are to be congratulated for having rescued from oblivion the delightful tale of "Moolelo Hawaii o Pakaa a me Ku-a-Pakaa, na Kahu Iwikuamoo o Keawenuiaumi, ke Alii o Hawaii, a o na Moopuna hoi a Laamaomao" (c. 1900), concisely rendered into English as "The Wind Gourd of La 'amaomao." This saga of the 16th century heroes Ku-a-Nu'uanu, his son Paka'a, and Paka'a's son Ku-a-Paka'a, is a refreshing story offering rare insights into pre-contact Hawai'i. Paka'a inherits from his mother, the beautiful La'amaomao of Kaua'i, the wind gourd, a family heirloom, handed down by her maternal grandmother of the same name, the wind goddess La'amaomao. The gourd contains all the winds of the Big Island of Hawai'i, and these winds are at the service of the owner of the gourd, provided he or she knows the respective chants. The Wind Gourd of La 'amaomao enables the reader to understand important values of pre-contact Hawai'i, such as the role played by the ideal attendant of an ali'i, which was characterized by a caring attitude both towards the lord as well as towards the maka'ainana, the commoners, and which included expertise in a variety of useful skills, such as canoe carving, canoe sailing, fishing, bird catching, and a host of others. Generosity, kindness, loyalty, honesty, justice, filial piety, patience, are values of old Hawai'i emphasized in this saga which was considered significant enough to be published in several versions in Hawaiian and English, beginning with Samuel M. Kamakau's serial, "Moolelo no Pakaa" (1869-1871), in the newspapers "Ke Au Okoa" and "Ka Nupepa Kuokoa." The present version by Moses K. Nakuina is based on Kamakau but draws from a number of other sources as well. The prominent role of riddles and-the love for intellectual challenges triumph in the crafty exchange of rejoinder and repartee on the part of the chanters. Parallels can be found to similar passages in the epics of Homer and in Greek and Latin mythology. The wind gourd can be easily compared with the bag of winds entrusted by Aeolus to Odysseus, and the parade of Keawenui-a-'Umi's canoes evokes the famous catalogue of ships in the Iliad. This is not to suggest a spurious link between islands in the central Pacific and the Troy of old, but serves merely as a reminder that traditions of this kind are universal to what could be called the epic stage of a culture and civilization. The translators, both highly accomplished scholars, were faced with a difficult task since the original text is complex, subtle, and filled with obscure allusions. The chants in particular present obstacles on account of a multitude of archaic expressions. Occasionally a touch of the overly modern and colloquial can be found in the English version, but on the whole it represents a brilliant achievement.

Moses Kuaea Nakuina (born July 12, 1867, in Waialua, O'ahu) was the first president of the Christian Endeavor Union in Hawai'i (1903), a member of the Territorial House of Representatives (elected from Maui, Moloka'i, and Lana'i in 1904), and editor of the Hawaiian newspaper "Ka Hoaloha" (1907). His parents were John and Kaimawaho Nakuina, who were married on Maui; he was the grandson of Puakaloheau, the great-grandson of Kekaiakea, and the nephew of Reverend Kuaea of Kaumakapili Church in Honolulu. Nakuina attended Royal School in Honolulu. He went to the boarding school in Malumalu, Kaua'i, when his father became a county judge in Hanalei. When his father was sent to teach in Hilo, Nakuina attended Hilo Boarding School. Later he continued his education at Royal School on O'ahu. After his father's death, Nakuina went to work at the Government Records Office in Honolulu to support himself and his mother. The office was administered by Emma M. Beckley, a part-Hawaiian woman who was a commissioner of water rights, an authority on Hawaiian culture, and the first curator of Hawai'i's National Museum, as well as an author and storyteller. Moses married Emma (the widow of part-Hawaiian Fred K. Beckley) in 1887, the year he began working in the Records Office. In addition to serving in positions of business, government, and the church, Nakuina collected and published Hawaiian folktales and wrote and translated articles on Hawaiian culture. He spent the last years of his life as a minister of Kaumakapili Church, working strenuously with the prohibition campaign in 1910. He died at the age of 44 on August 3, 1911 at his Kaimuki home. In 1915, a bronze tablet in his memory was placed in Kaumakapili Church by the Christian Endeavor Societies. In addition to "Moolelo Hawaii o Pakaa a me Ku-a-Pakaa" ("The Hawaiian Story of Pakaa and Ku-a-Pakaa"), Nakuina also published an incomplete story entitled "Moolelo Hawaii o Kalapana, ke keiki hoopapa o Puna" ("The Hawaiian Story of Kalapana, a native-born child of Puna") in 1902. His articles and English translations of Hawaiian articles by other writers appeared in Thrum's "Hawaiian Annual" and include "Stories of Menehunes" (1895), "Hawaiian Surf Riding" (1896), "Fish Stories and Superstitions" (1901), "Ku-ula, the Fish God of Hawai'i" (1901), and "Aiai, Son of Ku-ula" (1902).