Never Mind, We'll Do It Ourselves: The Inside Story of How a Team of Renegades Broke Rules, Shattered Barriers, and Launched a Drone Warfare Revolution (Hardcover) 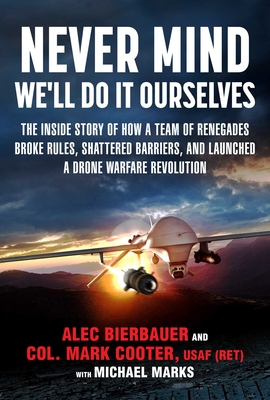 “An extraordinary, riveting, page-turning account—finally cleared for publication by the CIA—of the once highly classified effort by the CIA and special military units to develop a truly game-changing, transformational capability: armed drones."—General David Petraeus, US Army (Ret.), former Commander of the Surge in Iraq, US Central Command, and US and Coalition Forces in Afghanistan, and former Director of the CIA​

The Inside Story of How a CIA Officer and an Air Force Officer Joined Forces to Develop America’s Most Powerful Tool in the War on Terror.

Never Mind, We’ll Do It Ourselves is the story behind the origins of the Predator drone program and the dawn of unmanned warfare. A firsthand account told by an Air Force team leader and a CIA team leader, Never Mind, We’ll Do It Ourselves takes readers into the back offices and secret government hangars where the robotic revolution went from a mad scientist idea to a pivotal part of global airpower.
Featuring a foreword by Charlie Allen, an introduction by Lieutenant General John Campbell, USAF (Ret.), and an afterword by Lieutenant Colonel Gabe Brown, the story reveals the often conflicting perspectives between the defense and intelligence communities and puts the reader inside places like the CIA’s counterterrorism center on the morning of 9/11. Through the eyes of the men and women who lived it, you will experience the hunt for Usama bin Laden and the evolution of a program from passive surveillance to the complex hunter-killers that hang above the battlespace like ghosts.

Poised at the junction between The Right Stuff and The Bourne Identity, Never Mind, We’ll Do It Ourselves documents the way a group of cowboys, rogues, and bandits broke rules and defied convention to change the shape of modern warfare

Alec Bierbauer has spent a lifetime conducting counterterrorism and counterintelligence operations in venues ranging from Bosnia to Yemen and Afghanistan. With an emphasis on integrating emerging technologies into high-risk special programs, he was the CIA’s point man in the development of the Predator program. Bierbauer resides in Huntsville, Alabama.

Michael Marks has worked around the world within the US intelligence and special operations community, a career that stretches from the jungles of Nicaragua to the mountains of Afghanistan. A bestselling author, his books have been adopted by venues such as the FBI Academy and the Army Asymmetric Warfare Group. Marks resides in Great Falls, Virginia.

“An extraordinary, riveting, page-turning account—finally cleared for publication by the CIA—of the once highly classified effort by the CIA and special military units to develop a truly game-changing, transformational capability: armed drones. Few, if any, developments in recent decades have had a more significant impact on how we have been able to fight our enemies in the wars of the post-9/11 era. And it all started with the intrepid, innovative, tenacious individuals described in Never Mind, We’ll Do It Ourselves. They were the Wright Brothers of the Predator era, and this book captures their actions beautifully!”—General David Petraeus, US Army (Ret.), former Commander of the Surge in Iraq, US Central Command, and US and Coalition Forces in Afghanistan, and former Director of the CIA

"Never Mind We'll Do It Ourselves will give every American confidence that 'the right stuff' still exists in the DNA of our intelligence and military professionals. Their boldness, ingenuity, courage, and commitment changed the face of warfare forever and saved countless lives in the process. As a wartime commander, I will always be in their debt."—Admiral William H. McRaven, U.S. Navy (Retired) former Commander of the U.S. Special Operations Command

“What a stunning, fine read is Never Mind We'll Do It Ourselves! Alec Bierbauer, Col. Mark Cooter, and Michael Marks tell the real story behind the birth of US drones, armed and dangerous, in the dawn of the War on Terror. The first shot came in October of 2001 when the World Trade Center was still smoldering in ruins. This is not about high-ranking poohbahs taking courageous decisions. It is about guys with nicknames: Boom Boom, The Man With Two Brains, Joker, Albert. How they used velcro and duct tape to wire together control systems and Hellfire Missiles strapped below Predator Drones, the Lawnmower Machine. Read it! Enjoy it! Learn from it!”—Joseph L. Galloway, coauthor, We Were Soldiers Once . . . And Young, We Are Soldiers Still, They Were Soldiers, and Triumph Without Victory: A History of the Persian Gulf War