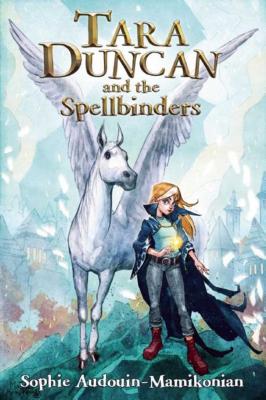 By HRH Princess Sophie Audouin-Mamikonian, William Rodarmor (Translated by)
Email orders@tridentbookscafe.com or call for price
Out of Print

Twelve-year-old Tara Duncan has been developing strange telekinetic powers that allow her to bend space and levitate others high above the ground. Her two best friends, Betty and Fabrice—often the victims of Tara’s uncontrollable abilities—are the only ones who know about Tara’s secret: Tara is a spellbinder.

Descended from a long line of powerful magic-wielders born on the planet OtherWorld, Tara is different from her friends. When a man with a mask, Magister, attacks her home, Tara escapes to OtherWorld, where she finds loyal friends and learns about her mysterious powers. But when Tara discovers that her mother is alive and held captive by Magister, will she have mastered her powers enough to be able to rescue her from his evil clutches?

This is the first book in the Tara Duncan series—a fantasy series full of action, adventure, and romance, focused on a heroine who will face danger and betrayal with resilience, courage, and magic.

HRH Princess Sophie Audouin-Mamikonian has been writing since the age of twelve. She holds a master’s in diplomacy and strategy and is married with two teenaged daughters. Her Tara Duncan series is a bestseller in France. She lives in Paris, France.

William Rodarmor is a veteran French literary translator, writer, and editor. His translation of Tamata and the Alliance, by Bernard Moitessier, won the 1996 Lewis Galantière Award from the American Translators Association. He lives in Berkeley, California.

“Well-written characters who do not fall into stereotypical and predictable behavior. Young readers looking for a light fantasy read with slapstick humor will be interested in this book.”
—VOYA

“Well-written characters who do not fall into stereotypical and predictable behavior. Young readers looking for a light fantasy read with slapstick humor will be interested in this book.”
—VOYA