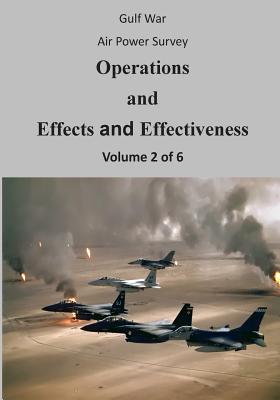 By U. S. Air Force, Office of Air Force History
$35.22
Not currently in store. Available to ship from distributor's warehouse.
(This book cannot be returned.)

In many ways "Desert Storm" represents a watershed in history; for much of the war, it consisted entirely of the application of massive doses of air power to the economic and bureaucratic infrastructure of Iraq and its military forces. How the Coalition applied air power differed greatly from previous wars in which air forces had played major roles. In this case, air power proved itself capable of use as both a rapier-like instrument and as a bludgeon. By itself, the air campaign achieved considerable effects on the Iraqi military, its infrastructure, its command and control, and even the political stability of the Bathist tyranny.Yet many things remain unclear about the campaign's impact on Iraq. Even the question of how many tanks, armored personnel carriers, artillery pieces, and other numerical indices of military power the campaign destroyed or damaged is open to dispute. As for the impact of air power on Iraq's military system, its military industrial complex, and even the regime itself, much of that remains opaque.Nevertheless, even with the imponderables the air campaign suggests that the military balance between air and ground has changed in fundamental ways. Bernard Trainor, the former Marine Corps general, former New York Times military correspondent and current professor at the JFK School of Government at Harvard, underlined that shift in a lecture to the Naval War College in October 1991. He noted that for the first time in history the ground campaign had supported the air campaign.This study focuses on the air war's operational conduct against Iraq and its military forces. For our purposes, the USAF's 1992 basic doctrinalmanual provides a useful definition of "operational art," the focus of this report: Operational art. The employment of military forces to attain strategic or operational objectives in a theater of war or in a theater of operationsthrough the design, organization, and conduct of campaigns and major operations: Operational art translates theater strategy into operational and, ultimately, tactical action.This report, consequently, focuses on the employment of air power as a part of Coalition military efforts to destroy Iraq's military forces andpotential, and to liberate Kuwait. Within that framework, the air campaign attempted a wide variety of objectives. This apparent diversion ofeffort reflected both the enonnous resources mobilized in the Gulf by the Coalition and fears of military commanders that the Iraqis would exit thewar at an early point, thereby preserving much of their military power.