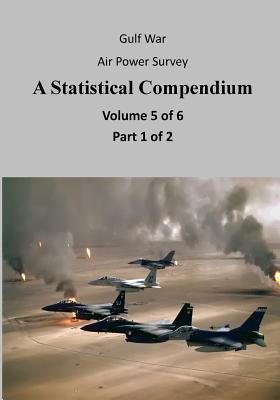 By U. S. Air Force, Office of Air Force History
$31.44
Not currently in store. Available to ship from distributor's warehouse.
(This book cannot be returned.)

This report draws upon the wealth of information collected about the Gulf War to present a compilation of statistical data that traces thecourse of the crisis, marks the progress of the war, and illustrates some of their most salient features. It is neither all inclusive nor infallible.When one considers that historians are still analyzing the events of World War II, and even World War I, the scant twenty-four months since the end of the Gulf War is far too brief an interval to aim for either of those goals.This report offers only those statistics that the Gulf War Air Power Survey considers to be most important in describing and analyzing air power in the Gulf War. It is not intended to portray other facets of Operations Desert Shield and Desert Storm except as they concern aerial operations. While constrained by time and availability of data, the authors selected data based on a few broad criteria. First, they included data from the various operational reporting mechanisms in the commands, such as situation reports (SITREPS) or individual mission reports (MISREPS) because they contained information directly concerned with the conduct of air operations as those commands perceived it at the time. Second, this report contains data that depict the tempo of mobilization, buildup, and operations to illustrate the depth and breadth of the underlying supporteffort as well as the scope of the Desert Storm air campaign. Finally, this report presents data that concentrate on the operational employment of air power and focus on information needed by those who plan future operations or shape future air force structure. As a result, space considerations mandated that much useful information could not be included in this report, and readers should consult the other reports for more detailed information.The authors had to choose at times between competing sources of information. In this war, as in most, even original records produced by participants at the time of the action were often erroneous. This should not be surprising, given the conditions of uncertainty and time pressure under which most wartime records are produced. Nonetheless, GWAPS is confident that no more comprehensive or reliable set of statistics on the air war has yet been produced.