Dear Palestine: A Social History of the 1948 War (Stanford Studies in Middle Eastern and Islamic Societies and) (Hardcover) 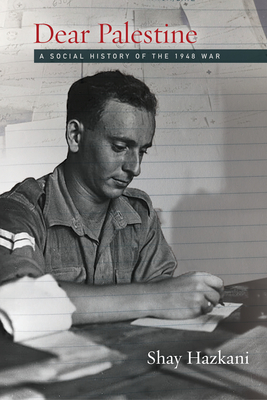 In 1948, a war broke out that would result in Israeli independence and the erasure of Arab Palestine. Over twenty months, thousands of Jews and Arabs came from all over the world to join those already on the ground to fight in the ranks of the Israel Defense Forces and the Arab Liberation Army. With this book, the young men and women who made up these armies come to life through their letters home, writing about everything from daily life to nationalism, colonialism, race, and the character of their enemies. Shay Hazkani offers a new history of the 1948 War through these letters, focusing on the people caught up in the conflict and its transnational reverberations.

Dear Palestine also examines how the architects of the conflict worked to influence and indoctrinate key ideologies in these ordinary soldiers, by examining battle orders, pamphlets, army magazines, and radio broadcasts. Through two narratives--the official and unofficial, the propaganda and the personal letters--Dear Palestine reveals the fissures between sanctioned nationalism and individual identity. This book reminds us that everyday people's fear, bravery, arrogance, cruelty, lies, and exaggerations are as important in history as the preoccupations of the elites.

Shay Hazkani is Assistant Professor of History and Jewish Studies at the University of Maryland, College Park.