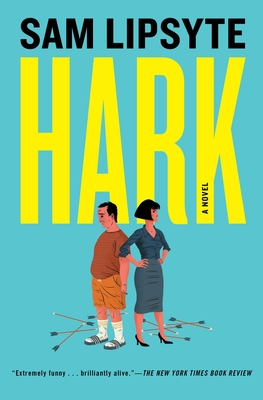 A scathing satire of new age spiritual movements and the people who exploit them. Hark Morner’s program of Mental Archery might be ready for the big time, but what about all the disciples who were with him from the very first pamphlet? For that matter, what about Hark himself?

An “extremely funny...brilliantly alive” (The New York Times Book Review) social satire of the highest order from bestselling author Sam Lipsyte, centered around an unwitting mindfulness guru and the phenomenon he initiates.

In an America convulsed by political upheaval, cultural discord, environmental catastrophe, and spiritual confusion, so many of us find ourselves anxious and distracted, searching desperately for peace, salvation, and—perhaps most immediately—just a little damn focus. Enter Hark Morner, a failed stand-up comic turned mindfulness guru whose revolutionary program is set to captivate the masses. But for Fraz and Tovah, a middle-aged couple slogging through a very rough patch, it may take more than the tenets of Hark’s “Mental Archery” to solve the riddles of love, lust, work, and parenthood on the eve of civilizational collapse. And given the sudden power of certain fringe players, including a renegade Ivy League ethicist, a gentle Swedish kidnapper, a social media tycoon with an empire on the skids, and a mysteriously influential (but undeniably slimy) catfish, it just might be too late. But what’s the point of a world, even a blasted-out post-apocalyptic world, if they don’t try with all their might to keep their marriage alive?

In this “awfully funny...tartly effective sendup of 21st-century America” (Star Tribune, Minneapolis) Sam Lipsyte reaches new peaks of daring in a novel that revels in contemporary absurdity and the wild poetry of everyday language while exploring the emotional truths of his characters. “Recommended reading” (Vanity Fair), in which “every line feels as thrillingly charged as a live wire” (O, The Oprah Magazine), Hark is a smart, incisive look at men, women, and children seeking meaning and dignity in a chaotic, ridiculous, and often dangerous world.

Sam Lipsyte is the author of the story collections Venus Drive and The Fun Parts and four novels: Hark, The Ask (a New York Times Notable Book), The Subject Steve, and Home Land, which was a New York Times Notable Book and received the Believer Book Award. His fiction has appeared in The New Yorker, The Paris Review, and Best American Short Stories, among other places. The recipient of a Guggenheim fellowship, he lives in New York City and teaches at Columbia University.

PRAISE FOR HARK BY SAM LIPSYTE

"Lipsyte is marvelous at inspiring equal parts sympathy and scorn....his sentences are as sharp as ever."—WASHINGTON POST

“The lauded satirist’s caustic send-up centers on a cabal of hucksters – among them a hapless husband whose marriage is ‘locked in low-key, quotidian apocalypse’—working to turn a phony self-help guru into a moneymaking messiah. Every line feels as thrillingly charged as a live wire.”—O MAGAZINE

"Fans of Lipsyte — also behind Venus Drive and the great Home Land — will pick up traces of his best work. He’s particularly good in the abstract in Hark, building out his premise and shaping a god complex for an 'end of men' world. ... This feels like a step forward for the Trump-era satire.”—ENTERTAINMENT WEEKLY

“Lipsyte writes nose to sentence, like a truffle hound. Jokes emerge from shifting letters, the keel of a clause....Lipsyte’s language maintains a flexibility, a resilience, that feels quite necessary in a time of oversimplification and duplicity. The novel’s two themes, faith and fraud, are both rooted in rhetoric, in the massage of the message. Same with 2019. In Hark’s final pages, as the story takes on messianic velocity, Lipsyte turns somber. The laughter stops, and the novel becomes, if not profound, then at least elegiac—which is perhaps satire’s bullseye.”—BOMB

“From his debut, Venus Drive (2000), a collection populated by a string of outsiders and misfits (a tormented summer camper, a small-time coke dealer, a peep-show habitué and his comatose sister), to the near-future dystopia of Hark (2019), his fourth novel, the Lipsyte-verse is fueled by failed or failing relationships and the comically agonized involutions of liberal self-consciousness. His work is as endlessly self-correcting and ­unstable as Dostoyevsky’s Notes from Underground, told with a compression and exacting attention to language that follows Stanley Elkin, Gordon Lish, and Barry Hannah. Lipsyte maps a world where the old-fashioned, middle-class American dream has been vaporized by rising inequality and greed, though his characters know full well—and won’t hesitate to let you know that they know, with the hangdog brio at the heart of his work—that the dream was never more than a corrupt, exclusionary sham from the beginning.”—THE PARIS REVIEW

“The first thing to be said about the book is that Sam has never been sharper or funnier. It is my habit when reading a bound galley for review to dog ear pages where passages that made me laugh or that seem worth quoting strike me. My galley of Hark is so comprehensively dog eared that the whole thing resembles a dog’s ear. The second thing to be said is that Hark presents Sam’s most socially expansive portrait and diagnosis of American life....Lipstye’s satire in Hark has never been more cutting or timely....There are also many parallels to be found in the way Nathanael West handles the volatile mixture of credulity and rage in the people he calls “the disappointed” in his indelible The Day of the Locust. In this as in so many other ways Sam Lipsyte is West’s truest successor among our living American novelists. I can offer no higher compliment."—THE MILLIONS

"Lipsyte (The Fun Parts) pillories the mindfulness movement in this acerbic and surprisingly moving novel of a hesitant guru and his self-involved inner circle... This is a searing exploration of desperate hopes, and Lipsyte’s potent blend of spot-on satire, menacing bit players, and deadpan humor will delight readers."—PUBLISHERS WEEKLY

“As usual, Lipsyte’s command of language is sublime."—KIRKUS REVIEWS

“Lipsyte…offers high-velocity moments in which bleakness and humor, the quotidian and the apocalyptic all gloriously converge.”—BOOKLIST

[A] trenchant satire about the quest for meaning and the lengths to which some people will go to achieve it.”—BOOKPAGE

“Madcap and full of love, laughter and unexpected beauty (not to mention the world’s greatest bone marrow smuggling scheme), if Hark doesn’t make you stalk Sam Lipsyte and try to break up his marriage, then you are not human.” —Gary Shteyngart, author of Super Sad True Love Story

"Wonderfully moving and beautifully musical, Lipsyte has penned a dastardly hysterical take on modern day rhetoric and the eternal ridiculousness of it all. More than a 'must read,' Hark is a 'must believe!'"  —Paul Beatty, author of The Sellout