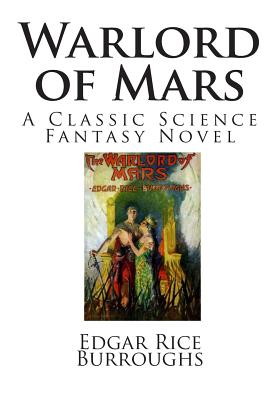 Warlord of Mars by Edgar Rice Burroughs - A Classic Science Fantasy Novel - The Warlord of Mars is a science fantasy novel written by Edgar Rice Burroughs, the third of his famous Barsoom series. Burroughs began writing it in June, 1913, going through five working titles; Yellow Men of Barsoom, The Fighting Prince of Mars, Across Savage Mars, The Prince of Helium, and The War Lord of Mars. The finished story was first published in All-Story Magazine as a four-part serial in the issues for December, 1913-March, 1914. It was later published as a complete novel by A. C. McClurg in September, 1919. John Carter discovers that a First Born knows the secret of the Temple of the Sun and he and the Holy Hekkador Matai Shang want to rescue the Holy Thern's daughter, who is imprisoned with Dejah Thoris and another Barsoomian princess, Thuvia of Ptarth. John Carter follows them in the hope of liberating his beloved wife. His antagonists flee to the north, taking the three women along. Thereafter John Carter follows them untiringly into the north polar regions where he discovers more fantastic creatures and ancient, mysterious Martian races. These he overcomes in battle, and is later proclaimed "Warlord of Barsoom" by his allies. This book is the last to feature Tars Tarkas, John Carter's ally, in any major role; indeed, the green Barsoomians of whom Tars Tarkas is an oligarch disappear altogether from most of the later novels.

Edgar Rice Burroughs (September 1, 1875 - March 19, 1950) was an American writer, best known for his creations of the jungle hero Tarzan and the heroic Mars adventurer John Carter, although he produced works in many genres.