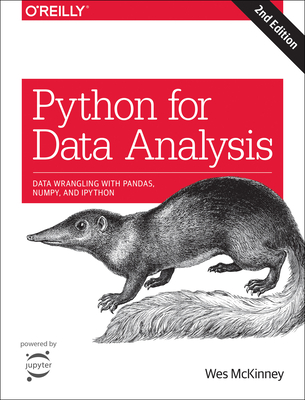 Looking for complete instructions on manipulating, processing, cleaning, and crunching structured data in Python? The second edition of this hands-on guide--updated for Python 3.6 and the latest versions of NumPy, IPython, Jupyter, and pandas in 2017--is packed with practical cases studies that show you how to effectively solve a broad set of data analysis problems using Python.

Wes McKinney is a New York?based software developer and entrepreneur. After finishing his undergraduate degree in mathematics at MIT in 2007, he went on to do quantitative finance work at AQR Capital Management in Greenwich, CT. Frustrated by cumbersome data analysis tools, he learned Python and started building what would later become the pandas project. He's now an active member of the Python data community and is an advocate for the use of Python in data analysis, finance, and statistical computing applications. Wes was later the co-founder and CEO of DataPad, whose technology assets and team were acquired by Cloudera in 2014. He has since become involved in big data technology, joining the Project Management Committees for the Apache Arrow and Apache Parquet projects in the Apache Software Foundation. In 2016, he joined Two Sigma Investments in New York City, where he continues working to make data analysis faster and easier through open source software.