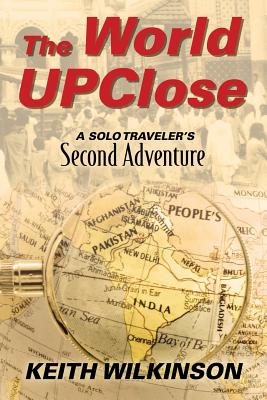 By Keith Wilkinson
Email orders@tridentbookscafe.com or call for price

The World UPClose: A Solo Traveler's Second Adventure by Keith Wilkinson. For the second time in two years, Keith Wilkinson embarks on a solo journey around the world. His first trip, a year and half before, had been a journey of adventure and personal discovery, bringing new discoveries of locale, history, and culture. As a result, he became involved in the lives of the people he met along the way. This time he revisits several of those people, choosing to stay with these friends and their families. In the process he experiences daily life and culture up close and personal. In Nepal, he is invited to stay a month with a young man and his family, something they had never done before with a foreigner. The experience provides a challenge for both parties. However, it is not to be his last. He stays with others in various countries. In addition to the countries he revisited, he ventures into new ones--Cambodia, Jordan, Syria, Lebanon, Greece and Morocco--for a total of fifteen. His travels include not only adventures but also the challenges of adjusting to the daily grind of living in new cultures with their foods, customs and religious rituals. He holds fully-grown tigers, explores ancient temples, walks among thousands of camels, sails the Nile in feluccas and shares Thanksgiving Dinner with a never-before-met cousin in Istanbul. It is in India that new friendships are forged which last to this day. He travels alone through the Middle East just months prior to the eruption of the Arab Spring. He ventures to Turkey, Greece and Morocco, where he finds himself short of funds when his wallet is stolen. In London, he stays with the Iraqi family of a young man he had met before in Beijing. In New York, just before Christmas, he is stranded by a blizzard. Again from daily journals, he recounts these and other experiences confronting and challenging a solo traveler who dares to meet the world up close and personal. From daily journals, he invites the reader to share in th.

Keith Wilkinson, a retired religious educator, was born on a farm near Watonga, Oklahoma. With degrees in history and religion, he kindles a keen interest in people and culture. Widowed, Wilkinson has three married daughters and six grandchildren. He lives near Edmond, Oklahoma. His first solo travel is detailed in Around The World: A Solo Adventure available from Outskirts Press or on Amazon.