Around the World: A Solo Adventure (Paperback) 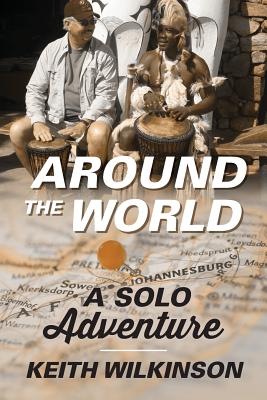 By Keith Wilkinson
Email orders@tridentbookscafe.com or call for price

What possesses a man to take on a solo adventure around the world? Widowed and retired at 68, Keith Wilkinson awakes one morning to a sudden remembrance of a boyhood fantasy to make a trip around the world. He has long dreamed of experiencing the faraway places and cultures he had seen in photographs in National Geographic. That morning, he says "Why not?"Grabbing a map of the world, he charts a course through South America, across to South Africa, up to Egypt, across northern India to Nepal, to Thailand and down to Perth, Australia. Would he cross Australia by train or plane? He could not decide. He charts a course from Sydney to Hong Kong, into China to Beijing and on to Ulan Bator, Mongolia. Hawaii becomes the final leg of the journey. He allows himself four months. Not wealthy on a fixed income, he knows it has to be budget travel all the way. Will he travel alone? None of his friends seem available to go. Will he really travel solo? Except for plane reservations, he chooses little or no itinerary within a country. He wants travel to be spontaneous. With little idea what to expect, he soon finds it easy to connects with locals, who include him in various adventures, and off they go. Each day provides a unique adventure From daily journals, he invites the reader to share the adventure and his observations of people and places around the world. His adventures include riots and demonstrations, impromptu mountain treks, visits to the southernmost tips of two continents. He spends time in a famous leader's jail cell, encounters a Gay Pride parade, faces arrest, spends nights camping with strangers in a desert, rides crowded trains, witnesses cremations, rides elephants, handles dangerous snakes, and spends one time in a police paddy wagon. He sees the Olympic torch arrive, meets the farmer who discovered one of archaeology's greatest finds, toboggans down the world's most historic wall, explores barren steppes in a faraway country, and more. This book is f.

Keith Wilkinson, a retired religious educator, national consultant and writer for churches, was born on a farm near Watonga, Oklahoma. With graduate degrees in history and religion, he kindles a keen interest in people and culture. Wilkinson is widowed, with three married daughters and six grandchildren. When not traveling, he lives alone near Edmond, Oklahoma.