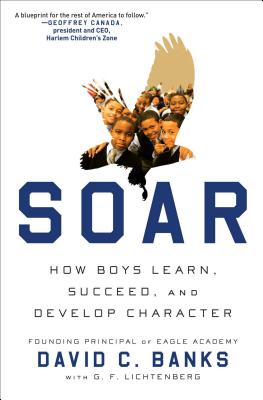 “The more the Eagle Academy approach and its successes can be shared, the more opportunities young people will have to find their way to their own triumphs.” —Wes Moore, New York Times bestselling author of The Other Wes Moore

From a respected educator who has advised Hillary Clinton and Cory Booker on scholastic issues, a “rare book that can bring tears to your eyes while showing the way to deep and meaningful social change” (New York Times bestselling author William Pollack).

In this country, the failure of black and Latino men in schools has become the norm. Some go as far to say that young men of color are helpless cases and they are treated as such in school. Though this unfair experience hits brown and black boys the hardest, the underlying causes are shared by boys of many backgrounds. There needs to be a change, and David Banks had some ideas to help at-risk boys. In 2004, he petitioned New York City’s mayor to allow an all-boys public school to open in one of the most troubled districts in the country, the South Bronx. He had a point to prove: when rituals that boys are innately drawn to are combined with college prep-level instruction and community mentorship, even the most challenging students can succeed. The result? The Eagle Academy for Young Men—the first all-boys public high school in New York City in more than thirty years—has flourished and has been successfully replicated in five locations in the city and in Newark, New Jersey.

In Soar, Banks shares the experiences of individual kids from the Eagle Academy as well as his own personal story. He reveals the specific approach he and his team use to drive students, from tapping into their natural competitiveness and peer-sensitivity, to providing rituals that mimic their instinctual need for hierarchy and fraternal camaraderie, to finding teachers who know firsthand the obstacles these students face.

Results-oriented and clear-eyed about the challenges and promises of educating boys at risk, Soar is “a must-read for those concerned with the welfare of young men” (Kirkus Reviews).

David Banks is the president and CEO of the Eagle Academy Foundation. He was the Founding Principal of the Eagle Academy for Young Men, the first school in a network of innovative all-boys public school in New York City. David resides in New Jersey. He has four children, Jamaal, Aaliyah, Ali, and Malcolm Rashaad, and one grandchild, Hayley.

G.F. Lichtenberg is a writer of literary fiction and memoir, and a cowriter of popular nonfiction.

“The more the Eagle Academy approach and its successes can be shared, the more opportunities young people will have to find their way to their own triumphs."
— Wes Moore, author of The Other Wes Moore

"David Banks is not just an extraordinary educator, he’s a great innovator. The Eagle Academy defied political correctness to do what was right for young men facing enormous challenges. It is a big idea that is saving lives and providing hope."
— Joel Klein, ex-Chancellor of the New York City Department of Education

"How do we get young people off the bench and into the game? Strong, committed father figures, ready to train, prepare, coach and mentor young people so they can grow into champions. Eagle Academy doesn’t just teach academic skills, it models character, so that Eagle graduates can be successful men –the next generation of the men and fathers we need. David Banks shows us how to stand up and save our boys."
— Allan Houston, General Manager for the New York Knicks

“Soar is the rare book that can bring tears to your eyes while showing the way to deep and meaningful social change: how we can significantly reshape our educational system for young men. Perhaps now we can stop waiting for Superman, thanks to our real-life mentor, David Banks, employing the wonderful educational models of Eagle Academy. I pray that all of us, mothers and fathers, teachers and employers, policymakers and politicians – all the citizens of this nation who have seen boys become an ‘endangered species’ in our public schools – have the fortitude that he has shown to cry out for, work for, and demand the change he offers us.”
— William Pollack, PhD, author of the New York Times bestseller, Real Boys, Associate Clinical Professor, Dept. of Psychiatry, Harvard Medical School, Founder and Director, Centers for Men and Boys

“Long before the crisis among black and Latino boys was a prominent part of the national discussion, David Banks and the Eagle Academy were setting high-water marks and designing strategies to save this most vulnerable of populations. David Banks doesn’t just tell us what should be done, he is telling us what he has done – and the results are stunning. This book is a blueprint for the rest of America to follow.”
— Geoffrey Canada, President and CEO Harlem Children’s Zone

"A must-read for those concerned with the welfare of young men."
— Kirkus Reviews

"[Eagle Academy] is showing America that there's another way far cheaper than prisons. This should not be the exception, this should be the rule."
— Cory Booker, former mayor of Newark, New Jersey, on the Eagle Academies