Desert Storm 1991: The most shattering air campaign in history (Paperback) 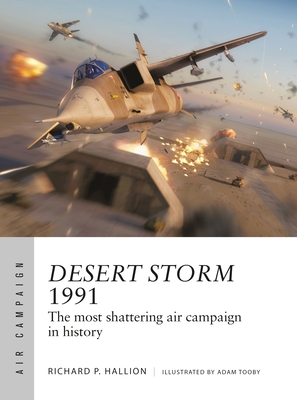 The combat phase of the Gulf War, Operation Desert Storm, was 43 days long. This consisted of a 39-day air campaign followed by a four-day armoured mechanized assault. Together they shattered what had been the world's fourth-largest army and sixth-largest air force, and overturned conventional military assumptions about the effectiveness and value of air power.

In this book, author Richard P. Hallion, one of the world's foremost experts on air warfare, explains why Desert Storm was a revolutionary victory, a war won with no single climatic battle. Instead, victory came thanks to a rigorously planned campaign, which opened with a devastating night of attacks that shattered Iraq's advanced air defence system, and allowed follow-on strikes in the subsequent weeks to savage Iraq's military infrastructure and troops in the field – largely by destroying capabilities and equipment, without massive loss of life. When the Coalition tanks finally rolled into Iraq, to widespread Iraqi surrenders, it was less an assault than an occupation.

The rapid victory of Desert Storm, which surprised many observers, led to widespread military reform as the world's advanced militaries saw the new capabilities of precision air power. The military world that we live in today reflects, to a large degree, the transformation of military power heralded by the air campaign of the 1991 Gulf War.

Richard P. Hallion holds a Ph.D. in history from the University of Maryland, and has completed specialized governmental and national security programs at the Federal Executive Institute, and the John F. Kennedy School of Government. He has been a Curator at the Smithsonian Institution's National Air and Space Museum; a Historian with the National Aeronautics and Space Administration and the U.S. Air Force; the Harold Keith Johnson Chair of Military History at the Army War College; the Charles Lindbergh Professor at the National Air and Space Museum; a Senior Issues and Policy Analyst for the Secretary of the Air Force; The Air Force Historian; a Senior Advisor for Air and Space Issues for the Air Force's Directorate for Security, Counterintelligence, and Special Programs; a Special Advisor for Aerospace Technology for the Air Force Chief Scientist; a Senior Advisor to the Science and Technology Policy Institute of the Institute for Defense Analyses; a Research Associate in Aeronautics for the National Air and Space Museum; and a Trustee of Florida Polytechnic University. He is a Fellow of the American Institute of Aeronautics and Astronautics, the Royal Aeronautical Society, and the Royal Historical Society, and an Honorary Member of the Order of Daedalians who has flown as a mission observer in a wide range of military aircraft. He lives in Shalimar, Florida.

Adam Tooby is an internationally renowned digital artist and illustrator. His work can be found in publications worldwide and as box art for model aircraft kits. He also runs a successful illustration studio and aviation prints business. He is based in Cheshire, UK. To buy artwork, or contact the artist, visit http://www.adamtooby.com/.