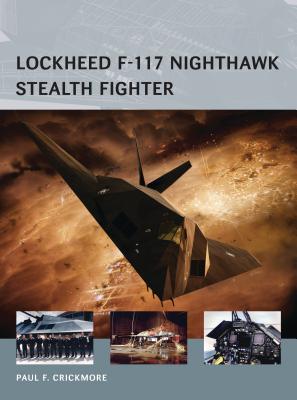 This is book number 16 in the Air Vanguard series.

From its questionable debut over Panama, the shoot-down of a Nighthawk during Operation Allied Force over the former Yugoslavia, to the mind-boggling successes enjoyed by the type in the two Gulf Wars, this is the story of another 'Skunk Works' icon that took aircraft design and operational capabilities to previously unprecedented levels.

Even from the earliest days of 'dog-fighting', when pilots attempted to attack their advisories with the sun on their backs, one adage has held true - "you can't destroy what you can't see". Even with the advent of radar the precept remains valid, however, the "But how?" conundrum had perplexed aircraft design engineers since the Second World War. Although designers and engineers had a number of tools available to help reduce an aircraft's Radar Cross Section (RCS), ranging from its physical shape, to the use of Radar Absorbent Materials (RAM) - as seen in the A-12/SR-71, any reductions achieved by the mid 1970's were at best modest and certainly not enough to gain "an explicit operational advantage". The magnitude of the problem faced is demonstrated by the radar equation "detection range is proportional to the fourth root of the radar cross-section." That is to say, in order to reduce the detection range by a factor of 10 in number, it is necessary to reduce the target aircraft's RCS by a factor of 10,000 or 40 dBs!

However utilising the unrivalled talent available within the legendary Lockheed 'Skunk Works' and what was at the time, ground-breaking computer technology, project 'Have Blue' validated the concept of stealth and evolved into the highly classified 'Senior Trend' (F-117A) programme.

During his time as an air traffic controller at the London Air Traffic Control Centre, Paul Crickmore gained a unique introduction into SR-71 operations from RAF Mildenhall, Suffolk. Teaming up with Osprey produced the first detailed book ever to be published on the subject. When additional information became available to him in 1990 following the initial shut down of SR-71 operations, Crickmore produced an even more detailed book, Lockheed SR-71 The Secret Missions Exposed - the standard reference work on the subject. The work was acclaimed by both the aviation press, Ben Rich (late president of the Skunk Works) and the crews that flew the SR-71. He is also the author of the first detailed book about the '117 written in partnership with his wife Alison; published by Motorbooks International in 1999. The author lives in Suffolk, England.