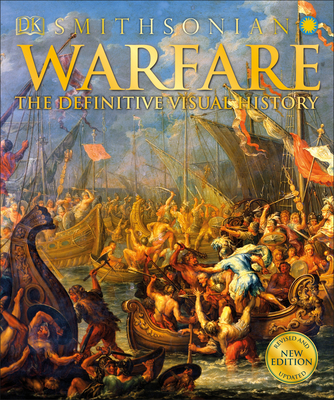 The most wide-ranging and visually arresting history of wars and warfare ever published, Warfare: The Definitive Visual History documents every major war or significant period of conflict in over 5,000 years of human history.

A must-have reference gift for military enthusiasts and general readers alike, no other book about warfare contains such a diverse selection of imagery including contemporary paintings and photographs, objects and artifacts, and specially commissioned artworks, maps, and diagrams.

Warfare: The Definitive Visual History includes a comprehensive directory of every major war, thematic spreads examining broader topics within the history of warfare, from the role of mercenaries, communications, and the treatment of wounded soldiers, and personal accounts and objects from soldiers and civilians that bring to life the human experience of battle.

From the earliest known Wars in Sumeria and Ancient Egypt War to the occupation of Iraq, Warfare: The Definitive Visual History combines a coherent and compelling spread-by-spread historical narrative with a wealth of supporting features to recount the epic 5,000-year story of warfare and combat through the ages.

We believe in the power of discovery. That's why we create books for everyone that explore ideas and nurture curiosity about the world we live in.

From first words to the Big Bang, from the wonders of nature to city adventures, you will find expert knowledge, hours of fun and endless inspiration in the pages of our books.