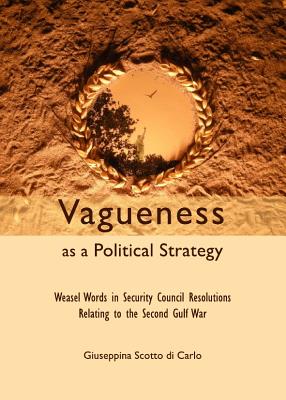 By Giuseppina Scotto Carlo
Not currently in store. Available to ship from distributor's warehouse.
(This book cannot be returned.)

Did Security Council resolutions authorise the use of force during the Second Gulf War? Did the UN intentionally use vague and indeterminate linguistic patterns as a set of discursive strategies with the overall legislative intent of using deliberate vagueness as a political strategy? Over the last few years, UN resolutions have been repeatedly questioned for the excessive presence of vagueness. In order to overcome the cultural divergences of recipient countries, UN diplomatic texts use vague words quite extensively, which could lead to biased or even strategically-motivated interpretations of resolutions, undermining their legal impact. This book proposes a linguistic analysis of whether the use of strategic vagueness in Security Council resolutions has contributed to the breakout of the Second Gulf War instead of a diplomatic solution to the controversy. The hypothesis is discussed through an analysis of the UN resolutions relating to the war, and reinforced through an analysis of US legislation related to the authorization for war, revealing how the US has interpreted UN legislation, in order to see how vague expressions used in UN resolutions have allowed the US to interpret them as a means to go to war. A second section of the work attempts to understand whether the same patterns have been used in resolutions relating to the Iranian nuclear crisis in 2010, revealing a relationship between the choice of vague linguistic features and the use of intentional vagueness as a political strategy.