The Sandman Vol. 9: The Kindly Ones (New Edition) (Paperback) 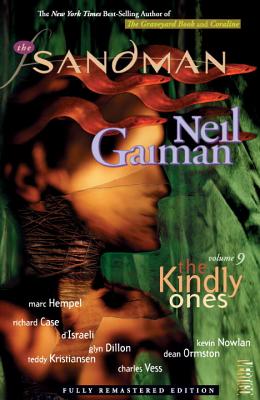 By Neil Gaiman
Hard to Find

This is book number 9 in the Sandman New Editions series.

In the longest Sandman story, Morpheus becomes the prey of the Furies, avenging spirits who torment those who spill family blood. A journey both begins and ends for the Lord of Dreams as threads and pieces building since the beginning of the series finally comes together in a thrilling climax that forever changes the world of THE SANDMAN.

Neil Gaiman is the NEW YORK TIMES best-selling author of AMERICAN GODS and CORALINE. His other books include the novels ANANSI BOYS, NEVERWHERE and STARDUST (winner of the American Library Association's Alex Awards as one of 2000's top ten adult novels for young adults) and the short fiction collections M IS FOR MAGIC, FRAGILE THINGS and SMOKE AND MIRRORS. With Roger Avary, he is the screenwriter of the motion picture BEOWULF, directed by Robert Zemeckis. His illustrated novel STARDUST was released as a major motion picture Summer 2007 starring Michelle Pfeiffer and Robert De Niro. Among his many awards are the Eisner, Hugo, the Nebula and the World.