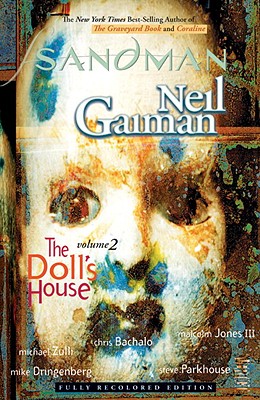 This is book number 2 in the Sandman New Editions series.

New York Times best-selling author Neil Gaiman's transcendent series SANDMAN is often hailed as the definitive Vertigo title and one of the finest achievements in graphic storytelling. Gaiman created an unforgettable tale of the forces that exist beyond life and death by weaving ancient mythology, folklore and fairy tales with his own distinct narrative vision.

During Morpheus's incarceration, three dreams escaped the Dreaming and are now loose in the waking world. At the same time, a young woman named Rose Walker is searching for her little brother. As their stories converge, a vortex is discovered that could destroy all dreamers, and the world itself. Features an introduction by Clive Barker.
This volume includes issues 9-16 of the original series and features completely new coloring, approved by the author.

Malcolm Jones III attended the High School of Art and Design and the Pratt Institute in New York City before making his comics debut in the pages of DC Comics' Young All-Stars. In addition to his celebrated work on The Sandman, he contributed his artistic talents to many other titles for both DC and Marvel Comics.