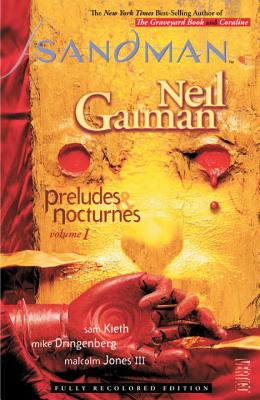 This is book number 1 in the Sandman New Editions series.

An occultist attempting to capture the physical embodiment of Death to bargain for eternal life traps her younger brother Dream instead. After his seventy-year imprisonment and eventual escape, Dream, also known as Morpheus, goes on a quest for his lost objects of power to reclaim his reign. From there, one of the greatest series in the history of the graphic novel genre begins...

New York Times best-selling author Neil Gaiman's transcendent series The Sandman is often hailed as the definitive Vertigo title and one of the finest achievements in comics storytelling. Gaiman created an unforgettable tale of the forces that exist beyond life and death by weaving ancient mythology, folklore and fairy tales with his own distinct narrative vision.

This graphic novel--a perfect jumping-on points for any reader--includes the introductions of Morpheus, Lucifer and The Endless, all intricate parts of this enduring series that is still as relevant today as ever.

Includes issues #1-8 of the original series with completely new coloring, approved by the author.

Sam Kieth was born in 1963 and started his professional career when he was seventeen. Later on he sold some work to DC Comics and Marvel, where he illustrated Wolverine. In 1987 Kieth drew the first five issues of Neil Gaiman's The Sandman and went on to create his own comic series called The Maxx, which was published by Image comics from 1993 until 1998. The success of the series spawned an award-winning cartoon on MTV, trading cards, a toy, and even some statues. This work is currently in print as graphic novels from DC's WildStorm imprint. Keith's recent work includes Wolverine/Hulk for Marvel Comics and Batman: Secrets and Scratch for DC Comics. He has also created several other creator-owned properties that have been published by WildStorm including Epicurus The Sage and Zero Girl.

Praise for Neil Gaiman's The Sandman:

"One of the few comics that segued from the comics crowd, entering the intellectual and art worlds, winning over a large non-comics-reading audience..."—The Hollywood Reporter

"The Sandman is a modern myth, as well as a precis on why the stories we tell matter so much."—Playboy