Baghdad Diaries: A Woman's Chronicle of War and Exile (Paperback) 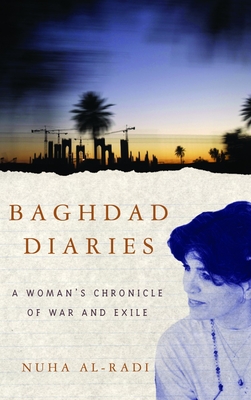 In this often moving, sometimes wry account of life in Baghdad during the first war on Iraq and in exile in the years following, Iraqi-born, British-educated artist Nuha al-Radi shows us the effects of war on ordinary people. She recounts the day-to-day realities of living in a city under siege, where food has to be consumed or thrown out because there is no way to preserve it, where eventually people cannot sleep until the nightly bombing commences, where packs of stray dogs roam the streets (and provide her own dog Salvi with a harem) and rats invade homes. Through it all, al-Radi works at her art and gathers with neighbors and family for meals and other occasions, happy and sad.

In the wake of the war, al-Radi lives in semi-exile, shuttling between Beirut and Amman, travelling to New York, London, Mexico and Yemen. As she suffers the indignities of being an Iraqi in exile, al-Radi immerses us in a way of life constricted by the stress and effects of war and embargoes, giving texture to a reality we have only been able to imagine before now. But what emanates most vibrantly from these diaries is the spirit of endurance and the celebration of the smallest of life’s joys.

Born in Baghdad in 1941, Nuha al-Radi trained at the Byam Shaw School of Art in London in the early 1960s and later taught at the American University of Beirut. A painter, ceramist, and sculptor, her works have been shown throughout the Arab world and in Berlin, London, and Washington.

“I searched for recent books about Iraq that described it as a real country. I found only one, the excellent Baghdad Diaries.” —Edward Said

“I hope many people will read this book and note the futility of war and perhaps do something about it; all my life I have cherished this hope in vain, but we must not stop.” —Mary Wesley, author of Harnessing Peacocks and A Sensible Life

“Something of what sanctions mean for ordinary Iraqis. . .records the day-to-day struggle for survival.” —Times Literary Supplement