Out of the Storm (Mass Market Paperbound) 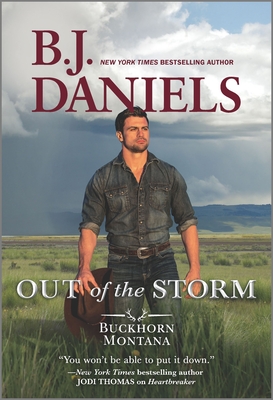 She can't lose him again...

One look at his warm brown eyes and Kate Jackson knows she's found her husband. It's been twenty years since Daniel went missing in a refinery explosion and was finally declared dead, but Kate never gave up hope, convinced he was somewhere out there, suffering from amnesia. Then, on a trip to Buckhorn, Montana, she sees him--working as a carpenter, scarred, but still her Danny. Yet Jon Harper, as he calls himself, insists he's a stranger.

Jon is certain he's not the man Kate's looking for. Though some of his memories are lost in shadow, how could he ever forget a woman like that? One thing Jon's instinct does tell him is that she's in danger from the very person she should trust most. Helping loyal, lovely Kate will mean exposing his own perilous past...but it's the only way to protect her and this new chance at forever.

Don't miss Under a Killer Moon, the next title in B.J. Daniels Buckhorn, Montana series where one small-town marshal will stop at nothing to catch a killer.

A Buckhorn, Montana Novel
Book 1: Out of the Storm
Book 2: From the Shadows
Book 3: At the Crossroads
Book 4: Before Buckhorn
Book 5: Under a Killer Moon
Book 6: When Justice Rides