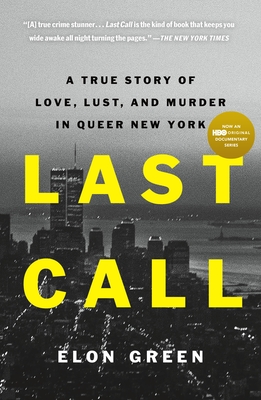 A "terrific, harrowing, true-crime account of an elusive serial killer who preyed upon gay men in the 1990s."
-The New York Times (Editor's Pick)

The gripping true story, told here for the first time, of the Last Call Killer and the gay community of New York City that he preyed upon.

The Townhouse Bar, midtown, July 1992: The piano player seems to know every song ever written, the crowd belts out the lyrics to their favorites, and a man standing nearby is drinking a Scotch and water. The man strikes the piano player as forgettable.

He looks bland and inconspicuous. Not at all what you think a serial killer looks like. But that’s what he is, and tonight, he has his sights set on a gray haired man. He will not be his first victim.

Nor will he be his last.

The Last Call Killer preyed upon gay men in New York in the ‘80s and ‘90s and had all the hallmarks of the most notorious serial killers. Yet because of the sexuality of his victims, the skyhigh murder rates, and the AIDS epidemic, his murders have been almost entirely forgotten.

This gripping true-crime narrative tells the story of the Last Call Killer and the decades-long chase to find him. And at the same time, it paints a portrait of his victims and a vibrant community navigating threat and resilience.

Elon Green has written for The New York Times Magazine, The Atlantic, and The New Yorker, and appears in Unspeakable Acts, Sarah Weinman’s anthology of true crime. Last Call: A True Story of Love, Lust, and Murder in Queer New York was his first book and won the Edgar Award for Best Fact Crime.

A "terrific, harrowing, true-crime account of an elusive serial killer who preyed upon gay men in the 1990s... [Green] provides an adrenalized police-procedural plot without ever losing sight of the fact that these were innocent human beings who were duped, butchered and discarded."
-The New York Times (Editor's Pick)

"Last Call feels like the most timeless literary true-crime classics, even as it forges a path through uncharted territory in the genre. Elon Green tenaciously yet gracefully investigates a time when so many lived in secret, and those secrets made them vulnerable to predation. A resonant, powerful book."
-Robert Kolker, #1 New York Times bestselling author of Lost Girls and Hidden Valley Road

"Last Call is not only a great book, nor a mere historical correction. It is an act of compassion..."
-The Boston Globe

"A stunning addition to the gay corner of the true-crime genre... As an investigative crime writer Elon puts in the work, with a sense of sensitivity and compassion... The care, the research, the investment on display in Last Call signals to me, at least, that Elon Green rises above the function of a dispassionate observer. He writes like a communal friend."
-Lambda Literary

"[A] true-crime stunner... Green’s sensitive portraits of the victims, and his deeply researched re-creation of an epoch of gay history, provide its soul. Inherently shocking material needs no dramatization... 'Last Call' is the kind of book that keeps you wide awake all night turning the pages."
-The New York Times

"Last Call, Elon Green's riveting true-crime thriller, works so vividly, so persuasively, that you feel as if Green was there through it all. He wasn't, to be sure, but his incisively detailed reportage will have you feeling that you are there too, to witness, with unnerving intimacy, a story as heartbreaking as it is harrowing."
-Benjamin Dreyer, New York Times bestselling author of Dreyer's English

"Last Call, Elon Green's stunner of a debut, scaffolds the gripping hunt for a serial killer over a heartfelt elegy to the lost lives of the murdered men, of a community ravaged by AIDS, and of a city in perpetual ruin and revival. This is a book I will reread again and again and find new and astonishing insights every time."
-Sarah Weinman, award-winning author of The Real Lolita and editor of Unspeakable Acts: True Tales of Crime, Murder, Deceit & Obsession

"Last Call is both a riveting whodunnit and a broad cultural history of the times."
-People

"[In true crime], the killers often become the focus, the object of fascination. This is not true in Last Call, which puts the victims first, and which, when it does reveal the discovery of the killer, doesn't attempt to make him seem like an anti-hero."
-NPR

"These crimes have been covered before, but Green sets his work apart by offering nuanced portraits of the victims and exploring how they navigated lives that led them to the bars that might have seemed like safe spaces but turned out to be anything but....A stellar tale of justice eluded, to add to the growing queer true crime genre."
-Library Journal, starred review

“In these riveting pages, Green reclaims a time, a place, and a community, weaving together a decades-long forensic investigation with a poignant elegy to murdered men.”
-Esquire

"A true crime thriller and lovingly detailed portrait of the gay community in New York during the 1990s, Last Call is a gripping read."
-Buzzfeed

"Far more than just a catch-a-killer tale, this book is a monument to the glittering, vibrant world created by a community well acquainted with mortality."
-Harper's Bazaar

"Departing from the tendency of the true-crime genre to centre on the killers, Mr. Green focuses on the victims in all their complexity. This is no easy feat."
-The Economist

"A sensitive and respectful page-turner, the very definition of a must-read."
-The Bay Area Reporter

"True crime too often focuses on the "bad guys".... In Last Call, Green instead foregrounds [the] known victims. He shows us the people they were and the lives they left behind. Their lives mattered, and Last Call is a testament to how homophobia shaped these men's lives and, eventually, their deaths."
-BookPage, starred review

"This captivating and thought-provoking read is a humanity-filled twist on the true crime genre."
-Booklist

"The most emotionally affecting non-fiction book I’ve read in 2021... [it] has the intrigue of a detective novel, yet the author also personalizes these victims with significant amounts of text for each. The result is a sad, deeply felt, extraordinarily memorable read."
-The Film Stage