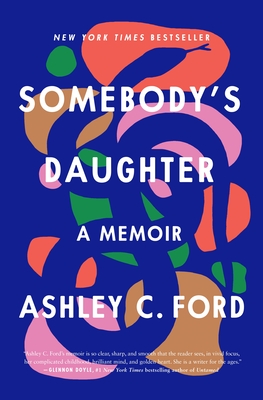 A beautiful memoir that dives deep into the author’s childhood and unpacks the way her past unfolded to make her the woman she is today. Ford grew up in a household that was tense with the unpredictable temper of her mother, dubbed ‘The Mother’, when angry. Her father was incarcerated, but provided her an ever present sense that she was special. The story starts with the news that her father is about to be released from prison, and then goes back to the beginning of her life. Beautifully written and engaging.

“This is a book people will be talking about forever.” —Glennon Doyle, #1 New York Times bestselling author of Untamed

“Ford’s wrenchingly brilliant memoir is truly a classic in the making. The writing is so richly observed and so suffused with love and yearning that I kept forgetting to breathe while reading it.” —John Green, #1 New York Times bestselling author

One of the most prominent voices of her generation debuts with an extraordinarily powerful memoir: the story of a childhood defined by the looming absence of her incarcerated father.

Through poverty, adolescence, and a fraught relationship with her mother, Ashley C. Ford wishes she could turn to her father for hope and encouragement. There are just a few problems: he’s in prison, and she doesn’t know what he did to end up there. She doesn’t know how to deal with the incessant worries that keep her up at night, or how to handle the changes in her body that draw unwanted attention from men. In her search for unconditional love, Ashley begins dating a boy her mother hates. When the relationship turns sour, he assaults her. Still reeling from the rape, which she keeps secret from her family, Ashley desperately searches for meaning in the chaos. Then, her grandmother reveals the truth about her father’s incarceration . . . and Ashley’s entire world is turned upside down.

Somebody’s Daughter steps into the world of growing up a poor Black girl in Indiana with a family fragmented by incarceration, exploring how isolating and complex such a childhood can be. As Ashley battles her body and her environment, she embarks on a powerful journey to find the threads between who she is and what she was born into, and the complicated familial love that often binds them.

Ashley C. Ford is a writer, host, and educator who lives in Indianapolis, Indiana with her husband, poet and fiction writer Kelly Stacy, and their chocolate lab Astro Renegade Ford-Stacy. Ford is the former host of The Chronicles of Now podcast, co-host of The HBO companion podcast Lovecraft Country Radio, seasons one & three of MasterCard’s Fortune Favors The Bold, as well as the video interview series PROFILE by BuzzFeed News, and Brooklyn-based news & culture TV show, 112BK.

“This is a book people will be talking about forever.” —Glennon Doyle, #1 New York Times bestselling author of Untamed

"Somebody’s Daughter is the heart-wrenching yet equally witty and wondrous story of how Ford came through the fire and emerged triumphant, as her own unapologetic, Black-girl self." —The New York Times

"Somebody’s Daughter stands out as one of the BEST memoirs of 2021." —BookRiot

"A master class on how to love your family and still live with individuality and freedom. Her story is particular to her, but it's also about every single one of us. I mean, it helped me to lead myself toward breaking old familial patterns and creating new ones, truly, because the way she talks about her family and the way that she talks about the boundaries she creates is just stunning." —Abby Wambach on NPR's Morning Edition, "Soccer Star Abby Wambach Recommends 3 Reads On Sports And Leadership"

"Perhaps the greatest contribution Ford makes is to offer her story — written in the most lively and lucid prose — in its most raw and unabridged form...By telling her truth so honestly and authentically, Ford invites us to tell ours, too." —The Washington Post

"Ford’s vulnerability on the page is an extraordinary feat, as she masterfully traces how the yearning girl she once was became the empowered woman she is today." —Esquire

"Ford executes her task with both unstinting honesty and rare tenderness toward the deeply flawed, but steadfast, circle of adults who raised her. The resulting portraits, of her mother and grandmother, in particular, are remarkably vivid and humane, haunting the reader long after one has closed the book’s pages..." —LA Review of Books

“Sure to be one of the best memoirs of 2021.” —Kirkus Reviews, starred review

"Armed with the insight and lessons from her youth, the author emerged as a bright young college student who learned to love herself for who she was and who she has yet to become." —The New York Journal Review of Books

"With a lucidity that is almost a superpower, [Ford] transports us into her singular experience of growing up poor and Black and female in Fort Wayne, Ind." —People magazine, Book of the Week

"A thoughtful debut. Ford writes with a flush and sophisticated pen. But the heartbeat of Ford’s firstborn is her ability to pinpoint critical moments on her self-discovering journey, and, like Baldwin and Abdurraqib, find respectable ways to perform and not drown in her suffering." —USA Today

"Rather than reduce these painful memories to a reflective interpretation, Ford lifts the language into a shimmering lyric register that is polyphonic... Her understanding that the ones we love are imperfect crafts a shining star for the reader to follow." —San Francisco Chronicle

"A shining example of story and craft that embodies how exquisite a memoir can be." —Sarah Neilson, The Seattle Times

"A triumphant coming-of-age story... It's Ford's willingness to share her thoughts and observations, warts and all, that sets her memoir apart. She's a woman unafraid to face herself and share what she sees, which she does with admirable realism, humor—and especially, heart." —Yahoo!Life

"There are no neat solutions, only honest ones. In showing that, this empathetic and sharply written memoir shines." —PopSugar

"This is a memoir about love, live, and freedom. It's not just good — it's beautiful." —Brené Brown

“A memoir so clear, sharp, and smooth that the reader sees, in vivid focus, Ashley C. Ford’s complicated childhood, brilliant mind, and golden heart. The gravity and urgency of Somebody’s Daughter anchored me to my chair and slowed my heartbeat. Ashley C. Ford is a writer for the ages, and Somebody’s Daughter will be a book of the year.” —Glennon Doyle, #1 New York Times bestselling author of Untamed

“Ashley C. Ford’s wrenchingly brilliant memoir is truly a classic in the making. Ford’s writing is so richly observed and so suffused with love and yearning that I kept forgetting to breathe while reading it.” —John Green, #1 New York Times bestselling author

"Those starved to feel something post-pandemic are sure to be jolted back to life by this brilliant memoir." —Steph Buschardt, Publishers Weekly

"Layering in the complexities of her relationship with her mother, her changing body and a boyfriend who grows abusive, Ford offers a heart-wrenching coming-of-age story" —Time, The 21 Most Anticipated Books of 2021

"In this beautiful, delicate memoir, writer Ashley C. Ford recounts a childhood defined by her incarcerated father's absence...and she starts a journey toward true and powerful selfhood." —Elle, 55 Books to Read in 2021

"Her coming-of-age story gets at how to both acknowledge and break away from what we’re born into." —Cosmopolitan, These New Books Coming Out in 2021 Are Guaranteed to Make Your Reading List

"Ashley C. Ford writes with lyrical vulnerability...Her most powerful personal essays have delved into her girlhood, race, incarceration, poverty, and family ties—themes she expands on in this recollection of her childhood and her father’s imprisonment." —Garden and Gun, Top of 2021 Reading List for Southerners

"Her writing shines with extraordinary insight and grace, and Somebody’s Daughter is a book so many of you will want to read." —Electric Literature, 43 Books by Women of Color to Read in 2021

"As Ashley battles her body and her environment, she provides a poignant coming-of-age recollection that speaks to finding the threads between who you are and what you were born into, and the complicated familial love that often binds them." —SheThePeople, Non-Fiction Books 2021: 27 Authors to Watch Out For

"I think it’s going to resonate with so many young girls of color who grew up in this kind of adversity and how you can come up out of that." —Boston.com, 21 Books to Look Out For in 2021, According to Local Experts

"The story of her wrenching upbringing and her hard-won journey to peace." —Entertainment Weekly

"Ashley C. Ford, a journalist and host of the “Chronicles of Now” podcast, makes her much-buzzed book debut with an intensely personal story: her relationship with her incarcerated father." —Lebanon-Express (OR), Most Anticipated 2021 Books

“Ashley C. Ford’s wrenchingly brilliant memoir is truly a classic in the making. Ford’s writing is so richly observed and so suffused with love and yearning that I kept forgetting to breathe while reading it.” —John Green, #1 New York Times bestselling author

“A memoir so clear, sharp, and smooth that the reader sees, in vivid focus, Ashley C. Ford’s complicated childhood, brilliant mind, and golden heart. The gravity and urgency of Somebody’s Daughter anchored me to my chair and slowed my heartbeat. Ashley C. Ford is a writer for the ages, and Somebody’s Daughter will be a book of the year.” —Glennon Doyle, #1 New York Times bestselling author of Untamed

“A masterpiece of acceptance and exploration, of growth and forgiveness, and—maybe most important of all—learning how not to forgive. Ashley C. Ford’s talent is on full display, as is her heart.” —Isaac Fitzgerald, bestselling author of How to Be a Pirate

“Ashley C. Ford went deep into the well of herself and her history and came back to the light with the book now in your hands. A piercing interrogation of who we are—to ourselves and to the people laying claim to us—Somebody’s Daughter is an opportunity for each of us to illuminate the ties that bind, entangle, and connect us to one another.” —Saeed Jones, author of How We Fight for Our Lives

“An achingly honest account of a complicated childhood. Through heartache and grief, Somebody’s Daughter is the portrait of someone determined to love deeply, to honor the person they are meant to be, and to tell their story in service of a greater truth. I haven’t stopped thinking about this book since I closed it, and neither will you.” —Aminatou Sow, New York Times bestselling coauthor of Big Friendship

“A comfort to those who feel lost, Somebody’s Daughter is a powerful book that will give everybody the courage to love again.” —Laurie Halse Anderson, author of the National Book Award finalist Speak

"Ford creates fully three-dimensional portraits of her mother, grandmother, and other key players, using a child's-eye view to show us their failings and the calculations, negotiations, and survival tactics she developed in response to them." - Kirkus Reviews, starred review