What You Want to See: A Mystery (Roxane Weary #2) (Paperback) 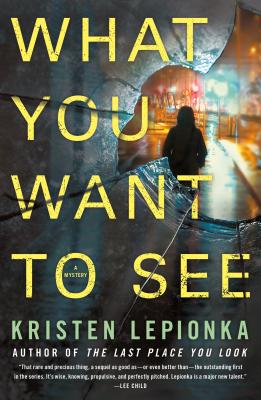 By Kristen Lepionka
$17.99
Available to Ship from Distributor's Warehouse

This is book number 2 in the Roxane Weary series.

In What You Want to See, Anthony, Macavity, and Shamus Award-winning author Kristen Lepionka takes readers on a wild ride with every brilliant plot twist and turn.

Marin Strasser has a secret. Her fiancé thinks her secret is that she’s having an affair, and he hires P.I. Roxane Weary to prove it. Then, just days into the case, Marin is shot to death on a side street in an apparent mugging. But soon enough the police begin to focus on Roxane's client for Marin’s death; so she starts to dig deeper into Marin’s life—discovering that the elegant woman she’s been following has a past and a half, including two previous marriages, an adult son fresh out of prison, and a criminal record of her own.

The trail leads to a crew of con artists, an ugly real estate scam that defrauds unsuspecting elderly homeowners out of their property, and the suspicious accident of a wealthy older woman who lives just down the street from where Marin was killed.

With Roxane’s client facing a murder indictment, the scammers hit close to home to force Roxane to drop the case, and it becomes clear that the stakes are as high as the secrets run deep.

"That rare and precious thing — a sequel as good as — or even better than — the outstanding first in the series. It’s wise, knowing, propulsive, and perfectly pitched. Lepionka is a major new talent." — Lee Child, #1 New York Times bestselling author

"WHAT YOU WANT TO SEE reminds me of everything that made me fall in love with PI fiction. A great character, a vivid setting, a twisty, timely story that happens to be beautifully written. Kristen Lepionka and Roxane Weary are the best things to happen to the genre in years." —Laura Lippman, New York Times bestselling author

"What You Want to See is a fresh, smart, edgy update of the best in classic detective fiction. Get used to the names Roxane Weary and Kristen Lepionka, because you’ll be hearing about them both for a long time." — Alafair Burke, New York Times bestselling author of The Wife