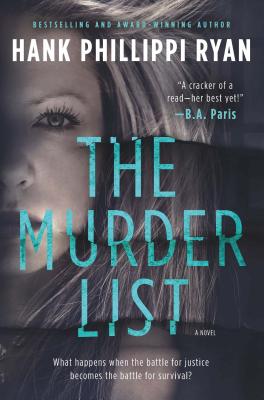 By Hank Phillippi Ryan
$27.99
On Our Shelves Now

The Murder List is a new standalone suspense novel in the tradition of Lisa Scottoline and B. A. Paris from award-winning author and reporter Hank Phillippi Ryan.

"An exhilarating thrill ride that keeps you turning pages.. Ryan deftly delivers a denouement as shocking as it is satisfying."--Liv Constantine, bestselling author of The Last Mrs. Parrish and The Last Time I Saw You

Law student Rachel North will tell you, without hesitation, what she knows to be true. She's smart, she’s a hard worker, she does the right thing, she’s successfully married to a faithful and devoted husband, a lion of Boston's defense bar, and her internship with the Boston DA's office is her ticket to a successful future.

And in this cat and mouse game--the battle for justice becomes a battle for survival.

The Murder List is a new standalone suspense novel in the tradition of Lisa Scottoline and B. A. Paris from award-winning author and reporter Hank Phillippi Ryan.

HANK PHILLIPPI RYAN has won five Agatha Awards, in addition to the Anthony, Macavity, Daphne du Maurier, and Mary Higgins Clark Award for her bestselling mystery novels. As an investigative reporter, her work has resulted in new laws, criminals sent to prison, homes saved from foreclosure, and millions of dollars in restitution for victims and consumers. Along with her 34 Emmys and14 Edward R. Murrow awards, Hank has received dozens of other honors for her ground-breaking journalism. A former president of Sisters in Crime and founder of MWA University, she lives in Boston with her husband, a nationally renowned civil rights and criminal defense attorney. She is the author of Trust Me, and the Jane Ryland series (The Other Woman, The Wrong Girl, Truth be Told, Say No More and What You See).

“A fireworks display of a novel: exciting, explosive, relentless—and likely to leave you gasping.” —AJ Finn

“Utterly absorbing! Ryan is a master working at the top of her game.” —Riley Sager

“In this riveting novel of suspense by the absolute master of the genre, Ryan conjures the consummate twisty thriller.” —Erica Ferencik

“Compelling...this will have readers' sympathies shifting from one character to another as it winds to an unsettling end." —Booklist

"Ryan is a master at telling stories that showcase the human element of crime and tragedy... ‘The Murder List’ is her best book to date, and the underlying mystery will baffle even the most savvy crime fiction and legal thriller readers.” —Associated Press

"Nobody keeps me guessing like Hank Phillippi Ryan and she’s done it again in The Murder List, which combines the best of psychological and legal thrillers into a genre entirely Ryan’s own. I raced through this high-stakes game between prosecution and defense, where the bad guys could be anyone, depending on where you stand. An absolute must read for 2019!” —Mindy Mejia, internationally acclaimed author of Leave No Trace