By Honor Bound: Two Navy SEALs, the Medal of Honor, and a Story of Extraordinary Courage (Paperback) 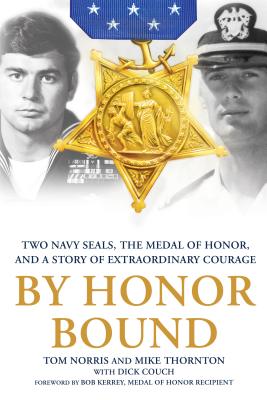 By Tom Norris, Mike Thornton, Dick Couch
$18.99
Not currently in store. Available to ship from distributor's warehouse.
(This book cannot be returned.)

In April of 1972, SEAL Lieutenant Tom Norris risked his life in an unprecedented ground rescue of two American airmen who were shot down behind enemy lines in North Vietnam, a feat for which he would be awarded the Medal of Honor--an award that represents the pinnacle of heroism and courage.

Just six months later, Norris was sent on a dangerous special reconnaissance mission that would take his team deep into enemy territory. On that mission, they engaged a vastly superior force. In the running gun battle that ensued, Lieutenant Norris was severely wounded; a bullet entered his left eye and exited the left side of his head. SEAL Petty Officer Mike Thornton, under heavy fire, fought his way back onto a North Vietnamese beach to rescue his officer. This was the first time Tom and Mike had been on a combat mission together. Mike's act of courage and loyalty marks the only time in modern history that the Medal of Honor has been awarded in a combat action where one recipient received the Medal for saving the life of another.

By Honor Bound is the story of Tom Norris and Mike Thornton, two living American heroes who grew up very differently, entered military service and the Navy SEAL teams for vastly different reasons, and were thrown together for a single combat mission--a mission that would define their lives from that day forward.

TOM NORRIS received the Medal of Honor for his behind-enemy-lines rescue of two downed airmen in Vietnam in April 1972.

MIKE THORNTON, a native of South Carolina, was awarded the medal for saving the life of his SEAL officer, Lieutenant Tom Norris.

DICK COUCH graduated from the Naval Academy in 1967 and served as a Surface Warfare Officer and SEAL Platoon Commander in Vietnam. Dick has enjoyed a unique relationship with the US Special Operations Command and has been allowed to document the special operations training venues for SEALs, Army Special Forces (Green Berets), Rangers, and Marines. He is a co-author of the Tom Clancy's Op-Center series. He has been a professor at the US Naval Academy where he taught ethics and is often called on to speak to issues of character, moral battlefield conduct, and training and deployment of American military special operations forces. He lives with his wife Julia in central Idaho.

"An exciting read and an All-American story that reflects their devotion to duty and to their brothers in arms."-Rick Perry, former Governor of Texas

"Tommy and Mike’s valorous heroics remind us all of the exceptional men and women who serve our country, both then and now.” —Admiral Mike Mullen, USN (ret.) Vietnam Veteran and 17th Chairman, Joint Chiefs of Staff