The Last Place You Look: A Mystery (Roxane Weary #1) (Hardcover) 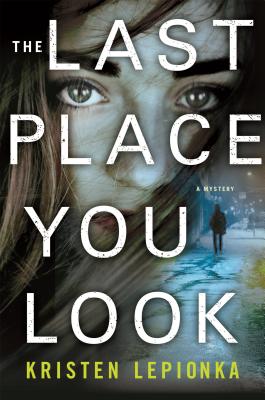 By Kristen Lepionka
Not currently in store. May be available on Bookshop.org.
Out of Print

This is book number 1 in the Roxane Weary series.

"Roxane is a wonderfully complex character...This is a remarkably accomplished debut mystery, with sensitive character development and a heart-stopping denouement. Let's hope there are more Roxane Weary novels on the way."—Booklist (starred review)

2018 Shamus Award Winner and Best First Novel Nominee for the Anthony and Macavity Awards, The Last Place You Look is a head-on collision between an allegedly closed case and a tenacious, troubled private investigator who doesn't know when to quit.

Nobody knows what happened to Sarah Cook. The beautiful blonde teenager disappeared fifteen years ago, the same night her parents were brutally murdered in their suburban Ohio home. Her boyfriend Brad Stockton—black and from the wrong side of the tracks—was convicted of the murders and is now on death row. Though he’s maintained his innocence all along, the clock is running out. His execution is only weeks away when his devoted sister insists she spied Sarah at an area gas station. Willing to try anything, she hires PI Roxane Weary to look at the case and see if she can locate Sarah.

Brad might be in a bad way, but private investigator Roxane Weary isn’t doing so hot herself. Still reeling from the recent death of her cop father in the line of duty, her main way of dealing with her grief has been working as little and drinking as much as possible. But Roxane finds herself drawn in to the story of Sarah's vanishing act, especially when she links the disappearance to one of her father’s unsolved murder cases involving another teen girl.

The stakes get higher as Roxane discovers that the two girls may not be the only beautiful blonde teenagers who’ve turned up missing or dead. As her investigation gets darker and darker, Roxane will have to risk everything to find the truth. Lives depend on her cracking this case—hers included.

"Lepionka reboots the thriller genre with her troubled hero, Roxane Weary, a private eye with little concern for her own safety (or the gender of her shifting sexual partners.) The Last Place You Look riffs off Raymond Chandler and Mickey Spillane but finds a way to make detective fiction relevant again, in 2017. I have never read a more confident debut."—James Renner, author of True Crime Addict and The Man From Primrose Lane

"In The Last Place You Look, a talented new voice in crime fiction gives us the seedier side of a Midwestern community—and a character worth following anywhere she trespasses. A wonderful debut."—Lori Rader-Day, Mary Higgins Clark Award- and Anthony Award-winning author of The Black Hour and Little Pretty Things

"Roxane is a wonderfully complex character...This is a remarkably accomplished debut mystery, with sensitive character development and a heart-stopping denouement. Let's hope there are more Roxane Weary novels on the way."—Booklist (starred review)

"Introducing a fascinating protagonist who combats her emotional demons with the aid of sugar, booze, and sex, this suspenseful, original, and confident debut will please fans of the hardboiled PI genre."—Library Journal (starred review)

"Utterly superb—can't remember when I last read such an expertly written and perfectly constructed book that gave me so much pure reading pleasure."— Sophie Hannah, author of Closed Casket and The Monogram Murders

"The Last Place You Look is a sharp, timely, and assured debut. Lepionka’s got a real knack for character. Her protagonist, private eye Roxane Weary, manages to honor her literary predecessors while still crackling with originality and life."—Chris Holm, Anthony Award-Winning author of The Killing Kind and Red Right Hand

"Just when you think the PI novel is dead, Kristen Lepionka brings it roaring back to life. Roxane Weary is a richly drawn protagonist who proves that 'hardboiled' and 'feminine' aren't mutually exclusive. This book is so good it makes me jealous."—Rob Hart, author of New Yorked and City of Rose, and associate publisher at Mysterious Press

"The Last Place You Look is a beautifully written mystery, one I devoured in a single sitting, late into the night. I’ll now follow detective Roxane Weary anywhere: into her hopes and fears, into her past, and—especially—into danger. An extraordinary debut novel."—Christopher Coake, author of You Came Back

“The P.I. at the heart of The Last Place You Look may be troubled and still green, but Kristen Lepionka’s debut mystery is as confident and deft as they come. A moving, arresting novel.”—Michael Kardos, author of Before He Finds Her

"In her daring debut, Kristen Lepionka blends traditional mystery with heart-stopping thriller elements to create something plenty original. The down-on-her-luck PI Roxane Weary battles her emotional demons to track down a human one, stumbling into plenty of trouble along the way. But she overcomes doubt in all its ugly forms, succeeding where others have failed. Lepionka exceeds expectations, as well, in this ambitious novel. With its memorable characters and surprising twists, The Last Place You Look will stay with readers long after they turn the last page."—Erica Wright, author of The Granite Moth and The Red Chameleon

"Seriously, this is a must read. I loved it."—Martina Cole, author of Close and Betrayal

"Kristen Lepionka spins a twisting, turning, enticing tale that keeps the reader guessing and turning pages to find out what happens next. "The Last Place You Look" is a promising first novel by a remarkable talent and you won't be disappointed if you look here first."—The Oklahoman