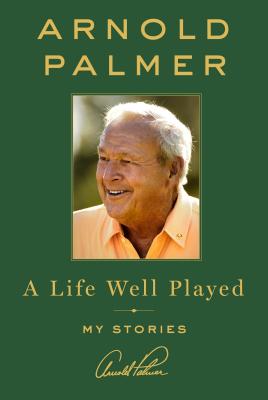 This book is Palmer’s parting gift to the world -- a treasure trove of entertaining anecdotes and timeless wisdom that readers, golfers and non-golfers alike, will celebrate and cherish. No one has won more fans around the world and no player has had a bigger impact on the sport of golf than Arnold Palmer. In fact, Palmer is considered by many to be the most important professional golfer in history, an American icon.

In A Life Well Played, Palmer takes stock of the many experiences of his life, bringing new details and insights to some familiar stories and sharing new ones. This book is for Arnie's Army and all golf fans but it is more than just a golf book; Palmer had tremendous success off the course as well and is most notable for his exemplary sportsmanship and business success, while always giving back to the fans who made it all possible. Gracious, fair, and a true gentleman, "Arnie" was the gold standard of how to conduct yourself in your career, life, and relationships. Perfect for men and women of all ages, his final book offers advice and guidance, sharing personal stories of his career on the course, success in business, and the great relationships that gave meaning to his life.

ARNOLD PALMER is regarded as one of the greatest players in professional golf history. He won seven major championships: The Masters four times, the U.S. Open once, and the Open Championship twice. "The King" was the first superstar of the sport's television age and is one of the athletes credited with popularizing and commercializing the sport. Palmer won the PGA Tour Lifetime Achievement Award in 1998 and, in 1974, was one of the original inductees into the World Golf Hall of Fame. He passed away in 2016 after completing his book, A Life Well Played.

"A warm good-bye from the great man himself. . . . We can picture Palmer in his dotage, sitting back in an easy chair, telling us short nuggets about the life he led, still feeling, as he writes, that he wants to share what he learned with people one more time." —Golf Digest

"The definitive final word on Palmer's legacy from the man himself. The tome's pages capture the warm, humble confidence of its author, the qualities that made Palmer not just a great athlete but a great man and role model. . . . An invaluable insight into the mind of a champion." —Newsweek

"A fast-paced reflection from the man who many consider the gold standard of conduct in his sport, with plenty of life lessons about how to remain humble and gracious while achieving superstardom." —Christian Science Monitor

"A treasure trove of entertaining anecdotes and timeless wisdom that readers will celebrate and cherish on the memory and impact of a true global icon. . . . Every chapter grabbed my attention. . . . I can't recommend this book highly enough." - The Sports Page Weekly

"Eminently readable and delightfully Arnie, A Life Well Played is a must for any of his many admirers." —BookPage

"Arnold Palmer has lived an incredible life, and the King now wants to share some of what's he experienced and what he's learned along the way...With Palmer being one of professional golf's greatest success stories, he should have plenty to offer readers." -- Golf News Net

"Palmer’s story is inextricably linked to a mentoring father: in Arnie’s case, a greenskeeper and eventual club pro who first put Arnie’s hands on a golf club and told him, “Boy, don’t you ever change that.” Inevitably, this volume strikes a (hopefully premature) valedictory note, but that will make it all the more popular with the King’s still-thriving army." - Booklist

"Packed with stories and a few tips . . . . A heartfelt, sincere, mini-self-portrait by a man who epitomizes class." —Kirkus Reviews

"The late golfer's last accomplishment in a life that, by any standard, was well-lived." —The Pittsburgh Tribune-Review