Masters of Disaster: The Ten Commandments of Damage Control (Paperback) 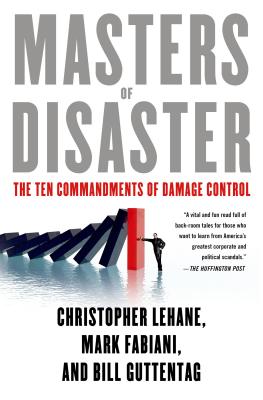 Whether you're a politician caught with his pants down, an investment bank accused of accounting improprieties, or even a family-owned restaurant with a lousy Yelp review, a crisis doesn't have to be the make-or-break moment of your career. Correctly managed, even the most embarrassing "reply all" can quickly become a thing of the past. In Masters of Disaster, Christopher Lehane and Mark Fabiani, reveal the magic formula you need to take control when it's your turn to be sucked into the vortex of the modern spin cycle. Covering the ten commandments of damage control, and based on their work for clients like Bill Clinton, Goldman Sachs and Hollywood studios, the authors outline the strategies that can make real time news alerts, Twitter trend lines and viral videos work for you rather against you. Full of both lively personal anecdotes and hard-knuckled straight talk, this is a must-read for anyone who wants to emerge with their reputation intact.

Christopher Lehane has provided damage control for global Fortune 500 companies, prominent elected officials, and well-known celebrities. Previously, he worked for the Clinton White House as part of the “rapid-response” team employed to respond to the various investigations of the Clinton Administration. He is the co-author of Masters of Disaster. Boasting frequent media appearances for his expert commentary on the art of damage control, he is a lawyer with a degree from Harvard Law School.

Mark Fabiani has provided damage control for global Fortune 500 companies, prominent elected officials, and well-known celebrities. Previously, he worked for the Clinton White House as part of the “rapid-response” team employed to respond to the various investigations of the Clinton Administration. He is the co-author of Masters of Disaster. Boasting frequent media appearances for his expert commentary on the art of damage control, he is a lawyer with a degree from Harvard Law School.

Bill Guttentag is a two-time Oscar-winning documentary and feature film writer producer-director. His films include the dramatic features Knife Fight and Live!, and the documentaries Nanking and Soundtrack for Revolution. He lectures at the Graduate School of Business at Stanford University.

“Masters of Disaster is the perfect playbook for how to respond when you're under enemy fire…a vital and fun read full of back-room tales for those who want to learn from America's greatest corporate and political scandals.” —The Huffington Post

“A how-to brought to you by the guys who defended Clinton on impeachment.” —The National Journal

“If you are a public figure, or even a private citizen who might engender controversy, read this book and put its authors on your speed dial. These guys are truly the masters not only of avoiding or minimizing disaster, but of dealing with the kind of crises faced by ordinary people when they first encounter the media, the law or the blood sport we call politics.” —Alan M. Dershowitz, author of The Trials of Zion

“In a hostile climate where reputations and markets can be capriciously destroyed in seconds, the old chestnuts about crisis management don't apply. What's needed is perspective from the seasoned Masters of Disaster who understand that damage control is a temperamental art, not grade school science. A valuable addition to the modern crisis canon.” —Eric Dezenhall, CEO Dezenhall Resources, Ltd. and author of Damage Control: The Essential Lessons of Crisis Management

“Every board, every manager and now almost every individual now faces the possibility of being swept up in a firestorm of media and mangled message. Masters of Disaster provides both sound rules and great examples of both the positive and negative kind to guide us all through to the best possible outcomes. The only danger is that you won't read it in advance. I recommend it to all my board colleagues and CEO friends.” —Howard Stevenson, Sarofim Rock Professor Emeritus, Harvard Business School

“Today crisis is common, and news of scandal, whether large or small, spreads rapidly. Through detailed case studies that focus on both those who have successfully overcome a crisis and those who have failed, Masters of Disaster offers essential insight into crisis management.” —Ted Leonsis, owner of the Washington Capitols and Washington Wizards

“Managing the world's most famous sports franchise is never dull, and there are times when I've turned to and found valuable tactics from this crisis management playbook.” —Jeanie Buss, president, Los Angeles Lakers

“Think if you are not in the public eye, this book does not apply to you? Think again. Disaster will happen to all of us, when we least expect it. And if you are in the public eye -- this is mandatory survival reading!” —Guerrino De Luca, CEO of Logitech