Chernobyl - The Dawn After: Apocalyptic Aftermath of a Nuclear Disaster (Vol. II) (Paperback) 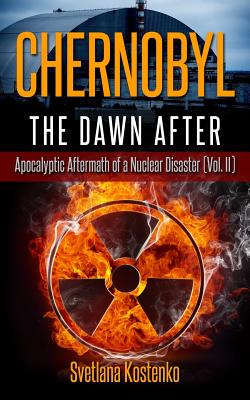 As the "Chernobyl" drama TV serie of 2019 marked thirty-three years since the accident of Chernobyl, the "Valerij Zayets" prize's winner and nominee for Pulitzer prize, author Svetlana Kostenko draws a vivid picture of the aftermath of the world most famous nuclear accident. Read below to discover more.

The aftermath of an accident is more perilous than the accident itself.

It proved to be true when everyone witnessed the effects and the political unrest erupted after the explosion of unit 04 at Chernobyl power plant in Pripyat, Soviet Union.

Besides the local population, most parts of Europe also had met with unforgiving consequences of radiation exposure. Crops, lands, soil, animals, and forests, no single ecosystem remained free of it's after effects. How the state responsible for the accident dealt this uncontrollable situation is an account worth investigating.

With her years of deep study and research on Ukrainian and European history, Svetlana Kostenko was able to draw relevant accounts on the aftermath of the Chernobyl disaster.

What actions were taken by the state to contain the worst possible nuclear emergency, and how the negligence of authorities responsible created a more precarious situation.

The world's response to the devastation is another story worth reading.

The author traveled to many states and studied the real-time effects of radiation exposure and the difficulties faced by the locals. Focus groups, intensive interviews, and online discussions, all helped her to create a consolidated narrative on the aftermath of this nuclear disaster.

Chernobyl: The Dawn After - Apocalyptic Aftermath of a Nuclear Disaster (Vol. II) is a well-written compilation of all the activities carried out after the accident, and it rightly shares the horrendous outcomes of systematic discrepancies within a state.

With great power comes greater responsibility, had the Soviets learned this lesson earlier, the lives of thousands of people would have not been at threat.