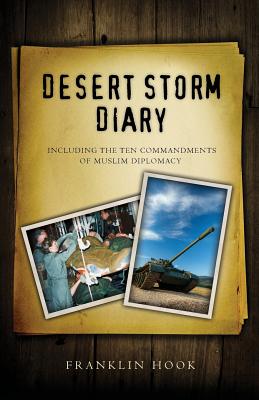 By W. Franklin Hook
$21.41
Not currently in store. Available to ship from distributor's warehouse.
(This book cannot be returned.)

Black & White Edition Desert Storm Diary is an insightful account of the first Persion Gulf War as witnessed by a reserve officer from North Dakota. Carefully detailed with entries from Col. Franklin Hook's wartime diary, the book captures the experiences of this physician and Army reservist called up and charged with command of the 311th Evacuation Hospital. Col. Hook's riveting report includes caring for patients in a combat zone and flying Medevac missions, while navigating problems with higher headquarters and negotiating with Arab Muslim civilians. Desert Storm Diary documents the chronology of the war, including its major battles, its leaders and its countless heroes. Desert Storm Diary also captures a story beyond military history as it unfolds as a family memoir recounting the Gulf War experiences of Hook's two sons, Bill and Paul, both deployed overseas at the same time and serving as a B-52 pilot and an Abrams M1-A1 tank platoon commander respectively. Bill and Paul's stories are featured as father-son interviews, and Col. Hook captures the spirit of a father's simultaneous pride and concern as he documents Bill's role in the last B-52 mission over Baghdad and describes his own angst over hearing a serviceman from North Dakota was missing after a B-52 bombing run. Col. Hook's memoir closes with an epilogue of informative perspective, "Reflections and the Ten Commandments of Muslim Diplomacy".