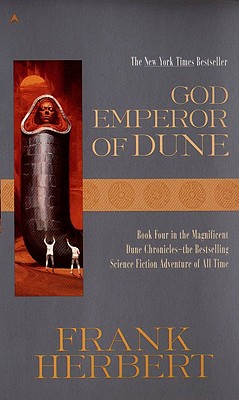 By Frank Herbert
Email or call for price
Hard to Find

This is book number 4 in the Dune Chronicles (Pb) series.

THE CROWNING ACHIEVEMENT OF THE MOST SUCCESSFUL SCIENCE FICTION SERIES IN HISTORY With more than ten million copies sold, Frank Herbert's magnificent DUNE books stand among the major achievements of the imagination. God Emperor of Dune is the astonishing fourth book in the series. Centuries have passed on Dune itself, and the planet is green with life. Leto, the son of Dune's savior, is still alive but far from human, and the fate of all humanity hangs on his awesome sacrifice...